Update Required To play the media you will need to either update your browser to a recent version or update your Flash plugin.
By Susan Shand
29 September, 2019


The human rights group Amnesty International says thousands of migrant workers in Qatar are not getting paid by their employers. The workers also are being forced to live in bad conditions.

Qatar promised to change its labor laws for migrants in 2018. However, Amnesty said the Qatari government had failed to improve its policies on unpaid wages.

An employment system called kafala continues to give Qatari companies great power over migrant employees. It is a system of sponsorship. The system permits companies to hold a migrant's passport. It also prevents a migrant from changing jobs. An estimated 2 million migrants work in Qatar under the kafala system. 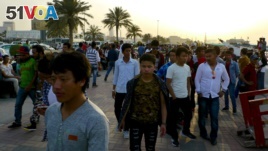 FILE - Migrant workers walk on the Corniche in Doha, Qatar.

Qatar will host the FIFA World Cup in 2022, and is building roads and other infrastructure with kafala labor.

The human rights group is calling on the international community to put more pressure on Qatar to improve the conditions for its migrant workers.

Qatar agreed to establish committees to resolve labor disputes. It also said it would set up special insurance to help workers who want to take legal action against their employers.

The problem is that some employers simply do not pay the migrants. They also might refuse to return their passports leaving them trapped in the country.

"The reality...is once they do not get their wages...they are stuck in a long legal battle," said Amnesty's May Romanos. "And even then, the money is not guaranteed at the end." She added that the migrants end up homeless and jobless, living in terrible conditions.

In 2018, Amnesty followed the cases of more than 2,000 migrant workers working for three employers in the building and cleaning businesses. The three employers were Hamton International, Hamad bin Khaled bin Hamad (HKH) and United Cleaning. The companies stopped paying wages when they claimed they had financial problems. Then, they stopped operating. Most workers did not receive any money for the work they had done and returned to their home countries with nothing.

The Qatari government said it has made meaningful reforms. It also claims it has intervened to help migrants settle problems with their employers. Amnesty says there is an urgent need for more judges to speed up the committee hearings and to make the special insurance more widely available.

Romanos is concerned that worldwide attention will decrease after the 2022 World Cup. "If things are not changing within the...next year or so, I think there will not be any more opportunity to change the system," she said.

Building projects for the 2022 World Cup are now nearly complete. Amnesty expects the mostly male migrant workers could be replaced with female workers to service tourism. It fears those women migrants may be treated worse than the men.

wage –n. money paid to workers based on the number of hours they work

sponsorship – n. an arrangement in which a sponsor agrees to give money to someone or something

insurance –n. an agreement in which a person makes regular payments in exchange for a guarantee of payment if they suffer a loss