Update Required To play the media you will need to either update your browser to a recent version or update your Flash plugin.
By Faith Pirlo
19 April 2022


Rising food prices, border closures and the war in Ukraine have caused many Muslim families in Senegal to feel the pressure of inflation during this special month of Ramadan.

Astou Mandiang is 64 years old, and she sells porridge by the road. When she and her family met for their first meal of the day, after the sun went down, there was no meat on the table.

"At the market there is a lack of food," said Mandiang, while she fixed dinner in her kitchen without electricity. 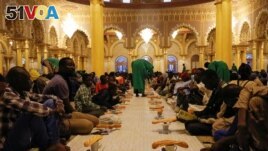 Food prices in West Africa have increased 20 to 30 percent since 2017 because of the lack of farm workers, dry conditions and various conflicts. The pandemic has hurt supply chains because of borders closing.

And recently, the war in Ukraine caused even more pressure on Muslim families. They cannot replace food supplies for visiting family, neighbors, or people in need.

"Prices have soared, and we return home without knowing what to cook. When (they) give us change, we think they made a mistake. They tell us the price has risen, and there is nothing we can do," Mandiang said.

Mandiang only has enough money to buy fish because it is less costly than meat. Fish is available because Senegal is by the ocean. She is thankful that she bought enough onions before the price increased during Ramadan.

Most traditional food in Senegal, like onions and rice, are bought from other countries. Rice is 10 percent more costly, and cooking oil has risen 50 percent more.

Mamadou Diop is a representative from a charity, Action Against Hunger, in Senegal. He said that the charity depends on outside resources for help in feeding people.

Diop also said that the price of beef has increased in Senegal. This is because Mali, a neighboring country, cannot sell their meat to other countries because of economic punishments for having had a military overthrow.

Charities are also struggling to help families. Astou Ndour is a charity worker, and she said her organization could only help 80 families this year, not the previous 90 families from last year.

soared – v. in increase greatly in height or to fly

charity –n. organizations that help people with food or housing

What do you think of the recent increase in prices of food and its effect on families during Ramadan? We want to hear from you. Write to us in the Comments Section.