Update Required To play the media you will need to either update your browser to a recent version or update your Flash plugin.
By Bryan Lynn
10 April 2022


A scientific team is headed to Tonga to measure the effects of January's undersea volcano explosion on the surrounding ocean. As part of the project, the team will use a robotic boat to help create a detailed map of the sea floor.

The explosion, or eruption, of the Hunga Tonga Hunga Ha'apai volcano was among the world's largest in the past 30 years.

The eruption on the South Pacific island nation sent smoke and gas shooting 30 kilometers into the air. It also created ocean waves, called tsunamis, that formed across the Pacific Ocean. Some of the waves were up to 15 meters high, Reuters news agency reported. 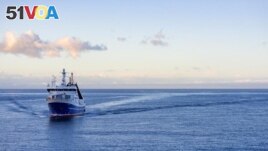 The eruption and tsunamis led to at least three deaths in Tonga and destroyed numerous homes, as well as communications equipment. Tonga's government said the effects of the explosion were felt as far away as South America.

The team going to Tonga will use sound and video equipment and other scientific instruments to examine the undersea effects of the explosion. The project is a joint effort between New Zealand's National Institute of Water and Atmospheric Research (NIWA) and Japan's non-profit Nippon Foundation.

The scientists will be "surveying thousands of square kilometers of the seafloor and collecting video images" of the eruption's effects, said a recent press release by NIWA.

The leader of the project is Mike Williams, the chief ocean scientist for NIWA. He predicts the team will find widespread changes to the ocean floor and sea life in areas around Tonga.

"Before the eruption, much of the volcano was above water. But now none of it is and the neighboring islands of Hunga Tonga and Hunga Ha'apai were reduced in size," Williams said. He added that the team expects to find "similarly dramatic" changes when mapping underwater areas.

Williams said the damage to undersea communication lines suggests the effects of the eruption stretched up to 50 kilometers from the volcano's center. This means the explosion likely affected ocean life in an area of at least 8,000 square kilometers.

The scientists will gather underwater sound data from devices known as "echosounders." The equipment is designed to map the shape and structure of the underwater landscape, NIWA said.

In an online video published on Facebook, Williams said the scientists will also deploy a video system that will survey wide areas of the seabed. This should help the team see how debris from the volcano has affected sea life in the area.

The team will travel to Tongo aboard a NIWA research ship and will spend a little over two weeks in the area.

The researchers will also use a robotic boat to collect environmental data and carry out detailed mapping operations of affected areas. The boat, called Maxlimer, will be guided by controllers in Britain. The controllers are with SEA-KIT International, the British company that built it. The Maxlimer is set to keep surveying the area for up to 30 days.

Ben Simpson is the head of SEA-KIT International. He said in a statement the Tonga mapping operation is a good project to demonstrate the benefits of using robotic surveying equipment in the ocean. Simpson noted that the Maxlimer needs no crew and uses less than 2 percent of the fuel needed for most research ships.

Bryan Lynn wrote this story for VOA Learning English, based on reports from NIWA, Sea-Kit and Reuters.

survey – v. to look at or examine something carefully