Update Required To play the media you will need to either update your browser to a recent version or update your Flash plugin.
By Jonathan Evans
09 October 2021


A group of small robots are helping speed up mail delivery service in Greece's capital city of Athens.

Fifty-five, four-wheeled autonomous mobile robots are working in the mail center of the national mail service called the Hellenic Post.

They scan postal codes, weigh mail pieces and empty them into mail bags.

The robots are part of the state-owned company's digital restructuring program. It aims to deal with growing numbers of mail pieces from online shopping during the coronavirus pandemic.

George Constantopoulos is head of the Hellenic Post. He told Reuters, "Until recently, sorting has been carried out by manual labor with a high demand in time, often with errors occurring, causing delivery delays for our customers and increased costs for the company." 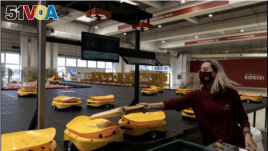 The robots handle up to 80 percent of the mail sorting at the center. Constantopoulos said the process was up to three times faster, and deliveries are nearly guaranteed for the next day.

The robots can handle as many as 168,000 pieces of mail, weighing up to 15 kilograms, each day. The robots only need to be recharged every four hours for 5 minutes.

Constantopoulos said, "The purpose is not to replace human workers with robots, but rather to augment human workforces and make them more efficient."

Meanwhile, the United States Postal Service (USPS) announced that it would slow down mail delivery service in some areas starting in October to cut costs.

USPS said some pieces of mail could take up to two days longer to arrive. And the service also raised the price of sending a letter from 55 to 58 cents.

Stelios Misinas and Alkis Konstantinidis reported on this story for the Reuters news service. Jonathan Evans adapted this story for Learning English. Hai Do was the editor.

augment – v. to add something to something in order to improve or complete it

scan – v. to examine with a special device, as a scanner, especially to obtain information

efficient – adj. capable of bringing about a desired result with little waste, as of time or energy