Update Required To play the media you will need to either update your browser to a recent version or update your Flash plugin.
By VOA
12 August, 2015


The government in Russia is moving forward with efforts to destroy food imports from Western countries. The government banned the imports because of the dispute between Russia and the West over Ukraine.

But a growing number of Russians say they find the ban in bad taste.

That is the sound of heavy earth-moving equipment running over Western cheese. Other Russian workers are burning boxes of frozen bacon. And state media reporters are cheering on the process. 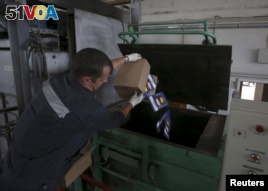 An employee burns meat at a customs house at Pulkovo Airport in St. Petersburg, Russia, August 6.

All this comes after President Vladimir Putin signed an order to destroy all Western foods that enter Russia in violation of existing sanctions.

Government officials say 350 tons of banned foods have been destroyed since the program went into effect earlier this month. There are plans to destroy even more. Russia's agriculture ministry has even requested a traveling "food crematoria" to speed up the work. Those machines would turn the food into ashes.

Such moves have led some to make fun of the program – and to a fair share of jokes among Russians on social media. But still others are criticizing the government's decision as insensitive. They say several generations of Russians can remember periods of hunger and food shortages.

In St. Petersburg last week, Karina Hestanova joined a group of demonstrators protesting the food destruction law. She and others noted that many older adults in what was then the city of Leningrad starved to death during World War II.

To this day, she says, no one throws away food on the table. It's offensive what they're doing, she adds.

An online campaign calling on government officials to overturn the decision has already gained over 300,000 supporters. When reached by Skype, the organizer – Olga Savelieva - says all she is asking is for banned goods to be donated to those in need.

"Payments to retired workers are small...and prices have gone up...even on food made here in Russia," she says.

President Putin's spokesman said the government may be open to some compromise. While the food destruction program will continue for now, the government plans to discuss Ms. Savelieva's campaign when it meets this week.

Charles Mayne in Moscow reported on this story for VOANews.com. George Grow adapted his report for Learning English. Kelly Jean Kelly was the editor.

cheese – n. a food that is made from milk

bacon – n. thin pieces of salted and smoked meat, usually from a pig

crematoria – n. places where dead bodies are cremated or destroyed

insensitive – adj. not responding to or caring about problems, changes or needs

table – n. an object that has a flat top and usually four legs