Update Required To play the media you will need to either update your browser to a recent version or update your Flash plugin.
By John Russell
02 February 2021


The Decatur, Georgia school system, near the U.S. Centers for Disease Control and Prevention (CDC), is in a community full of health professionals.

Decatur is a politically liberal area outside Atlanta. Many public health and medical professionals in the community gave suggestions about how schools should operate during the coronavirus crisis. Yet, deep divisions between the parents appeared. 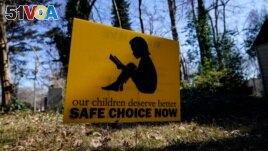 A sign that reads "our children deserve better safe choice now" is seen on Friday, Jan. 15, 2021, in Decatur, Ga., just down the road from the U.S. Centers for Disease Control and Prevention. (AP Photo/Brynn Anderson)

The disputes in Decatur demonstrate the issues many American communities have faced while trying to decide what is safe and acceptable for schools in the middle of a health crisis.

Parents in the Decatur school system had different ideas about reopening schools.

One emergency medicine doctor said early reopening plans for the system's 5,000-plus students were not safe enough. A doctor doing work for the CDC suggested reopenings should be delayed.

Others, including a leader of the CDC's COVID-19 vaccine efforts, argued the district could get students back in classrooms safely. They suggested that not returning students risked their development and mental health.

"The challenge for me has been trying to weigh all of these things that I'm being told by experts and non-experts alike to try to make the best decision that we can," he said. "And that's what I, and I'm sure other superintendents, have been struggling with."

Superintendent is the term used to describe the head of schools in a particular area in the United States.

In the school reopening debate, each side argued that data and science supported their view. The debate sometimes became angry and unpleasant.

Health officials say there is growing evidence that children are not the main drivers of community spread. Virus spread is fairly low in schools where mask-wearing, social distancing and contact tracing are in effect. The CDC says that for schools to open safely, they and their surrounding communities must take preventive measures.

But without clear reopening rules from federal and state leaders, school officials have had to consider the science themselves, Dude said.

When Dude released a reopening plan for the fall, some parents and teachers questioned whether it was safe. When he stopped the reopening, other parents got angry, criticizing the quick change. Some suggested online schooling was not something that could work for long.

Tiffany Tesfamichael is a single parent who moved to Decatur because of the schools. She was concerned about neighbors who were against opening schools, but did not oppose opening businesses.

"Why aren't they out here with signs protesting restaurants if they really, really mean it?" she said.

Dude ended up asking a large group of volunteers to make suggestions for reopening schools.

He then decided on a new plan for January. The plan called for younger students to attend school for part of the day in small groups. Older students would continue with online learning.

Some CDC employees and other health professionals objected to part of the plan. They argued in a letter to a community news website that safe, in-person learning was possible for older students if the right preventive measures were taken. They suggested that decision-makers were misreading evidence about virus spread in schools.

A hospital doctor treating COVID-19 patients sent her own letter, warning that reopening schools as cases increased would be irresponsible.

Around Decatur, people tried to avoid the issue in everyday discussions with their neighbors. But the disputes continued during school board meetings and on social media.

In a Facebook group for parents, the disagreements got so bad that some users said their social media posts had been shared with their employers by others trying to insult them.

Kerry Ludlam is a parent of middle school students in the Decatur school system. She worries about the discussions yet to come.

Ludlam said people insulted each other from behind their computers, "forgetting that at some point, the world is going to get back to normal..." she told The Associated Press. "And we're going to have to face the things we said to each other and the things we accused each other of," she added.

Kantele Franko reported on this story for the Associated Press. John Russell adapted it for Learning English. Bryan Lynn was the editor.

mask – n. a covering for your face or for part of your face

contact tracing – n. the process of identifying people who may have come into contact with an infected person