Update Required To play the media you will need to either update your browser to a recent version or update your Flash plugin.
By Mario Ritter Jr.
30 September, 2019

Archaeologists recently published their findings in the journal Nature. They say they found three such objects in ancient child burial places in Germany. The objects contained very small amounts of milk from cows, sheep and goats.

The oldest of the three vessels dated back to the Bronze Age, and was between 2,800 and 3,200 years old. 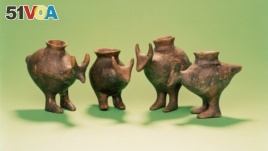 Late Bronze Age feeding vessels from Vosendorf, Austria, are seen in this image released on September 25, 2019. A study in the journal Nature found that similar vessels were used to feed milk to babies. (Enver-Hirsch/Wien Museum/Handout via REUTERS)

Julie Dunne is a biomolecular archeologist with the University of Bristol in Britain. She was the lead writer of the study. She said, "I think this has provided us the first direct evidence of what foods babies were eating or being weaned on to in prehistory." She added, "I think this shows us the love and care these prehistoric people had for their babies."

The objects were small enough to fit into a baby's hands. The archeologists believe they were vessels for milk. They had a narrow spout for the baby to drink the liquid.

While the three objects examined by the study were somewhat plain, others were in the shapes of animals. Those vessels had animal heads with long ears or horns and human-looking feet.

"I find them incredibly cute. And prehistoric people may have thought so, too..." said archaeologist Katharina Rebay-Salisbury. She is with the Institute for Oriental and European Archaeology of the Austrian Academy of Sciences. She co-wrote the study.

"They testify to the creativity and playfulness we often forget to attribute to our ancestors," Rebay-Salisbury added.

She noted that life at the time was not easy. Many people lived in unclean conditions, experienced hunger and disease and faced low life expectancy. During the Bronze Age and the Iron Age that followed in Europe, about one-third of all newborns died before their first birthday. Only about half of children reached adulthood, Rebay-Salisbury said.

These feeding vessels may have made life easier for mothers. Animal milk could be used instead of breastfeeding, the researchers said. This meant the duties of motherhood could "also be undertaken by other members of the community when children are fed with feeding vessels," Rebay-Salisbury noted.

Will Dunham wrote this story for Reuters. Mario Ritter Jr. adapted it for VOA Learning English. Ashley Thompson was the editor.

archaeologist –n. a science that deals with human life in the past by studying bones, tools and other artifacts

ceramic –n. something made of baked clay

vessel –n. a container for liquids

wean –v. to start feed a child food instead of mother's milk

spout –n. a tube that permits liquid to flow out of something

attribute –v. to think that someone else has certain qualities