Update Required To play the media you will need to either update your browser to a recent version or update your Flash plugin.
By Pete Musto
10 June, 2018


Scientists have identified three genes that may have played an important part in a major development in human evolution.

The genes are being linked to the increase in brain size that took place in ancestors of human beings. This increase led to the development of mental abilities that define what it means to be human.

Researchers published two reports on their observations of the genes in the publication Cell in late May.

The researchers believe the genes first appeared between three and four million years ago. This was just before a period in the fossil record that shows a major brain enlargement in the species from which humans evolved.

The three genes share almost the exact same qualities. Along with a fourth one that seems to serve no purpose, they are called NOTCH2NL genes. They came from a gene family believed to have developed hundreds of millions of years ago. They are also important in the development of embryos.

The NOTCH2NL genes are especially active in the collection of nerve stem cells in the cerebral cortex. The cerebral cortex is the outer part of the brain responsible for the highest mental processes. These include language, memory and reasoning.

The genes were found to slow the development of stem cells in the cerebral cortex into neurons in the embryo. The researchers say this delay leads to the production of a higher number of more developed nerve cells in this area of the brain.

Pierre Vanderhaeghen is a developmental neurobiologist at the Université Libre de Bruxelles in Belgium. He told the Reuters news service that, in large part, the cerebral cortex is responsible for what defines humans as a species and as individuals.

"Understanding how it emerged in evolution is a fascinating question, touching at the basic origins of mankind," said Vanderhaeghen.

David Haussler is a biomolecular engineer and the scientific director of the University of California, Santa Cruz Genomics Institute. He added that it is "the ultimate evolutionary question" and a very interesting area of research in which to work.

The species Australopithecus afarensis is an ancestor of humans that combined both ape-like and human-like qualities. The well-known fossil named "Lucy," discovered in Ethiopia in 1974, was a member of that species. Lucy lived in Africa at about the time these genes are believed to have appeared.

Sofie Salama is a UC-Santa Cruz biomolecular engineering research scientist. She said it would be great if it were possible to record the complete order of all of Lucy's genetic material, her DNA. But she noted that it would be nearly impossible. 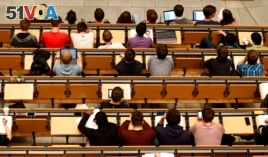 FILE PHOTO: Students attend a lecture in the auditorium of a university in Munich, Germany, May 25, 2016. REUTERS/Michaela Rehle

The NOTCH2NL genes are not present in the closest genetic relatives to human beings. None were found in monkeys or orangutans.

However, Reuters reports that the researchers did find the genes in the remains of two human ancestor species: Neanderthals and Denisovans.

NOTCH2NL gene abnormalities were found to be connected problems that affect the brain. These include autism, schizophrenia and both unusually large and unusually small head size.

Will Dunham reported this story for the Reuters news service. Pete Musto adapted it for VOA Learning English. Mario Ritter was the editor.

We want to hear from you. What more do you think researchers will learn about how the human brain developed? Write to us in the Comments Section or on 51VOA.COM.

fossil - n. remains of an organism from the past

neuron(s) – n. a cell that carries messages between the brain and other parts of the body and that is the basic unit of the nervous system

origin(s) – n. a cause, rise or beginning

ultimate – adj. greatest or most extreme

relative(s) – n. an animal or plant connected to another by common ancestry

abnormalities – n. things that are not normal or usual, usually in a way that is undesirable or worrying