Update Required To play the media you will need to either update your browser to a recent version or update your Flash plugin.
By Phil Dierking
03 June, 2018

Researchers studied the effects of one such gas -- carbon dioxide -- on rice. The researchers grew rice plants in a controlled environment. They set carbon dioxide levels to what scientists are predicting for our planet by the end of the century. They found that the resulting rice crops had lower than normal levels of vitamins, minerals and protein.

The researchers said the effects of planet-warming gasses would be most severe for the poorest citizens in some of the least developed countries. These people generally eat the most rice and have the least complex diets, they noted.

A report on the study was published in the journal Science Advances.

In the experiment, scientists grew 18 kinds of rice in fields in China and Japan. They pumped carbon dioxide gas over the plants in an effort to create the atmosphere of the future.

However, vitamin E levels increased by about 13 percent on average. 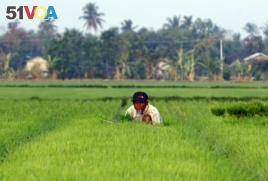 The results are bad news, "especially for the nutrition of the poorer population in less-developed countries," said the University of Tokyo's Kazuhiko Kobayashi, who helped to write the report.

That includes about 600 million people in Indonesia, Cambodia, Myanmar, Bangladesh, Laos and other nations, mainly in Southeast Asia, the report said.

Other studies have shown that higher temperatures from climate change and weather extremes will reduce food production. But scientists are finding that rising levels of carbon dioxide and other planet-warming gasses threaten food quality.

Earlier studies showed that wheat, maize, rice, field peas and soybeans grown under high carbon dioxide conditions all had lower levels of protein and minerals. Scientists estimated that almost 150 million people might be at risk of having too little protein or zinc in their diet by 2050.

One of the scientists is Sam Myers of Harvard University in the American state of Massachusetts. He said that findings like this are an example of the surprises climate change creates.

"My concern is, there are many more surprises to come," he said.

Myers noted that pollution, loss of some species, destruction of forests, and other human activities are likely to produce unexpected problems. He said that you cannot completely change all the natural systems that living organisms have grown to depend on over millions of years without having effects come back to affect our own health.

The new study suggests a way to lower the nutritional harm of climate change.

One way, Kobayashi said, is to grow different forms of rice that have shown to be more resistant to higher carbon dioxide levels.

Steve Baragona wrote this story for VOANews. Phil Dierking adapted his story for Learning English. George Grow was the editor.

Have you seen plants that have been affected by climate change? Write to us in the Comments Section or on 51VOA.COM.

species - n. a group of related animals or plants that is smaller than a genus