Update Required To play the media you will need to either update your browser to a recent version or update your Flash plugin.
By Jill Robbins
28 July 2022


As seabird biologist Bonnie Slaton slides off a small boat and walks through waist-high water, the brown pelicans spread their wings overhead until she reaches Raccoon Island.

The narrow island is a small piece of land separating the American state of Louisiana from the Gulf of Mexico. During seabird breeding season, the place is full of noise and motion — one of the few remaining places of safety for the pelicans.

Twelve years ago, there were 15 low-lying islands with breeding areas for Louisiana's state bird. But today, only about six islands in southeastern Louisiana have brown pelican nests — the rest have disappeared underwater. 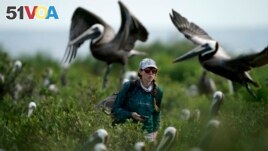 Slaton and others set up automatic cameras to observe pelican nests on the island. The cameras show that in recent years the main threat against pelicans is flooding — which can wash away entire nests, as happened in April 2021.

Louisiana's saltwater marshes, or wetlands, are also disappearing faster than anywhere else in the country. Scientists estimate Louisiana loses around 90 meters of wetlands every 60 to 90 minutes.

Slaton is a researcher at the University of Louisiana at Lafayette. She said, "Louisiana is rapidly losing land," partly because it is sinking but also because sea levels are rising.

The disappearing islands are the location of a conservation success story. For many years, scientists have worked to bring the pelicans back from totally dying off.

Mike Carloss is a state wildlife biologist in Louisiana. He said he never saw brown pelicans as a child in the 1960s. Like bald eagles, their populations had been killed by widespread DDT pesticide use. It thinned eggshells and prevented pelicans from hatching.

The beloved birds were completely gone from Louisiana, only images on the state flag. But a long-running effort to save them led to the birds' return.

After DDT was banned in the U.S. in 1972, biologists brought young pelicans from nearby Florida to repopulate empty islands across the Gulf of Mexico. More than 1,200 were released in southeastern Louisiana over 13 years.

One location was Raccoon Island, where Carloss, then an assistant at the Louisiana Department of Wildlife and Fisheries, helped feed the young pelicans on one island. "Somebody had to hand-feed them," he said.

As a state wildlife biologist, Carloss later oversaw restoration projects on the island. But now he fears that if islands keep disappearing, "we would be back to the days of the sixties, and not because of poisoning."

Erosion is a natural process leading to the rise and fall of barrier islands like Raccoon Island. Over the course of thousands of years, layers of soil washed down the Mississippi River to build up the islands. But it no longer comes down because people have built walls to control the flow of the Mississippi River.

Today, stone barriers are used to protect Raccoon Island from the currents of water. And government agencies work to protect other barrier islands. The money comes from payments after the 2010 Deepwater Horizon oil spill. But it will not last forever — and many sinking islands are not rebuilt at all.

The brown pelicans can live more than 20 years. So, the effect of disappearing breeding areas will take time to become clear. But the future for pelicans is uncertain in the barrier islands.

Christina Larson reported on this story for the Associated Press. Jill Robbins adapted it for Learning English.

breed – v. to produce young animals, birds, or the like

nest – n. the place where a bird lays its eggs and takes care of its young