Update Required To play the media you will need to either update your browser to a recent version or update your Flash plugin.
By Bryan Lynn
17 July 2022


Japanese researchers have released plans to recreate Earth's level of gravity on the moon.

The effort aims to support plans by the United States and other nations to establish long-term bases for humans on the moon.

The low gravity on the moon would affect humans living there in important ways. The American space agency NASA notes that gravity on the surface of the moon is one-sixth the gravity we experience on Earth. 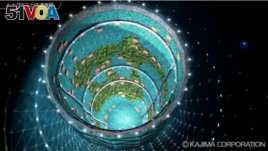 Researchers at Japan's Kyoto University and engineers at Japanese building company Kajima are working on plans to recreate Earth's level of gravity on the Moon and possibly Mars. (Image Credit: Kajima Corp./YouTube)

How to "make" gravity

Designers working on plans to recreate Earth's level of gravity, known as "1 g," on the moon are proposing the use of a centrifugal system. Centrifugal force is created by circular motion. A centrifuge machine turns very fast to force material in it away from a center or axis point, NASA explains.

This planned system would create artificial gravity within an enclosed space on the moon's surface.

The project is a partnership between researchers at Japan's Kyoto University and engineers at Japanese building company Kajima. The researchers said a centrifugal system could also work on Mars. The two organizations recently announced they will launch a joint study on developing the living environments.

"Humanity is now moving from the era of ‘staying' in space to the era of ‘living' on the Moon and Mars," said a statement issued by Kyoto University's SIC Human Spaceology Center.

The researchers said they plan to "develop an infrastructure" to support human life on the moon and Mars. This would involve building "artificial gravity habitats" in both places.

The huge, planned structures will be designed with living spaces, as well as small forests and waterfronts. The team is calling its moon project Lunar Glass. It says a simplified version of the structure could be built on the moon by 2050.

Yosuke Yamashiki is the director of the SIC Human Spaceology Center. He told Japan's Asahi Shimbun newspaper, "There is no plan like this in other countries' space development plans." Yamashiki added that the plan "represents important technologies" that will permit humans to move to space for long periods.

The American space agency NASA plans on returning humans to the moon as early as 2025 as part of its Artemis program. The program also calls for establishing a long-term base on the moon that could one day launch astronauts to Mars.

Last year, China and Russia signed an agreement to set up an international lunar research station on the surface of the moon.

And American billionaire and SpaceX chief Elon Musk has said he wants to launch humans to Mars on his company's rockets by 2030.

Why is gravity important for humans?

The Japanese researchers say one of the main purposes of the artificial gravity environments is to permit people to stay on the moon or Mars without suffering bad physical effects. Several studies have shown that the human body can be harmed by the lack of gravity in space.

The team said in a statement that an artificial gravity environment could make it possible for humans to give birth on places like the moon or Mars. In addition, children could develop and grow normally. The researchers note, however, that much study and testing will be needed to identify the true health benefits of artificial gravity in space.

By living in such environments, "human beings will be able to have children without anxiety and maintain a physical condition that allows them to return to Earth at any time," the researchers said.

Another part of the project involves plans to build a transportation system to travel between Earth, the moon and Mars. The so-called "Hexagon Space Track" would use the same artificial gravity technology as the proposed structures, the researchers said. The system would be designed to permit vehicles to stop at "stations" — built on satellites — orbiting the moon or Mars.

Bryan Lynn wrote this story for VOA Learning English, based on reports from Kyoto University, Kajima, Reuters and NASA.

axis – n. an imaginary, central line around which an object turns

artificial – adj. not natural, but made by people

era – n. a period of time in history that is special for a particular reason

infrastructure – n. the basic equipment and structures (such as roads and bridges) that are needed for a country or area

anxiety – n. the feeling of being very worried