Update Required To play the media you will need to either update your browser to a recent version or update your Flash plugin.
By Bryan Lynn
06 July 2022


The first model of Apple's iPhone was launched 15 years ago. Since then, many different smartphones have been introduced. The devices now influence our daily lives in many ways.

One thing that has changed is that many people now use their phones to easily take pictures anywhere, anytime, without the need for a camera. Not surprisingly, this change has caused major business problems for camera manufacturers.

Of course, the camera built into the first iPhone in June 2007 did not include a high-quality camera able to compete with separate camera models. But over the years, smartphone makers have invested heavily in research and development to change that. 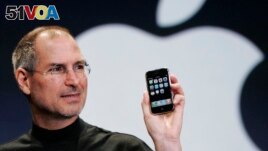 Today, many smartphones have high-quality cameras designed to produce better pictures than the ones most people used in the past for personal photographs. And most phone devices also offer powerful tools to improve the quality of the pictures we take.

Japan's Camera & Imaging Products Association (CIPA) is one of the main organizations that collects and reports on worldwide camera sales data. Its members include major manufacturers such as Canon, Nikon, Olympus, Fujifilm and Sony.

In a report issued in February, CIPA documented the continued drop in digital camera sales. In 2021, total shipments of digital cameras fell 6 percent, the group said in a press release. This latest drop, however, came after years of decreasing sales.

CIPA said the digital camera market continually expanded starting in 1999, when record-keeping efforts began. It experienced its first decrease in 2009 and continued to fall thereafter. The biggest change appeared from 2010 to 2020, when worldwide camera shipments fell about 93 percent, CIPA reported.

Although there was a small increase in 2017, overall digital camera sales have decreased each year since 2018, CIPA said. The decreases were mainly caused by drops in shipments of digital cameras that have built-in lenses, notes market research company Statista.

Camera makers have had more success selling digital cameras with interchangeable lenses. This is because these cameras are generally targeted at professional photographers who demand higher quality. Such cameras can produce "high image quality that distinguishes them from smartphones," CIPA said.

Business research company Research and Markets predicts worldwide sales are expected to keep dropping sharply. It noted in a report in February that the world market for digital cameras was estimated at 8.4 million devices in 2020. It says the market is expected to shrink to 1.2 million by 2026. The biggest drop is predicted for digital cameras with built-in lenses.

The continuing sales drops demonstrate the huge influence smartphones have had throughout the camera industry. But this does not mean that professional photographers never use smartphones to capture pictures.

Some news photographers, for example, have found advantages in using them in their work. The Associated Press recently asked some of its photographers who use iPhones to describe how they use the devices.

Brynn Anderson is based with the AP in Atlanta, Georgia. She said: "Sometimes being a photographer with a larger camera can be intimidating to the person being photographed. Using a phone makes it easier for me to get intimate moments that might not happen."

Dita Alangkara covers Jakarta, Indonesia for the AP. He said shooting with a smartphone opens up more possibilities on the streets of Jakarta. "People are so used to seeing others taking photos with their gadgets that they just ignore me. This gives me a whole new perspective to explore..."

Rodrigo Abd, an AP photographer in Buenos Aires, Argentina, agrees. He says using the iPhone makes it easier for him "to always be attentive" to everyday events when not covering a news story.

Khalil Hamra is an AP photographer in Istanbul, Turkey. He said, "Truth be told, every time I take a nice picture with my phone, I feel that something is missing and could have been better if I took it with my professional camera."

Oded Balilty is based in Tel Aviv, Israel. "It is a different tool that definitely has changed what we do," he said of the iPhone. But, he added: "It's the photographer, not the device, that determines the quality of a photo."

Bryan Lynn wrote this story for VOA Learning English, based on reports from The Associated Press, Reuters and the Camera & Imaging Products Association.

distinguish – v. to recognize the differences between to people, ideas or things

advantage – n. something good in a situation that helps you

intimidate – v. to frighten someone on purpose, especially so that they will do want you want them to do

gadget – n. a piece of equipment that does a particular job

perspective – n. the way you think about something

determine – v. to discover the truth or facts about something