Update Required To play the media you will need to either update your browser to a recent version or update your Flash plugin.
By John Russell
07 July 2022


Scientists working with the Large Hadron Collider (LHC) near Geneva have discovered three particles that have never been seen before.

The 27-kilometer-long LHC at CERN is the machine that found the Higgs boson particle. This particle, along with its linked energy field, is thought to be important to the formation of the universe after the Big Bang 13.7 billion years ago. 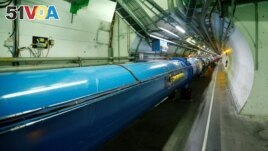 CERN says the LHC works by smashing two beams together and using special devices to record the results.

The two beams inside the LHC are made to collide, or hit each other, at four places around a ring. There are four particle detectors at these collision spots. They are known as ATLAS, CMS, ALICE and LHCb.

The LHCb working group observed a new kind of "pentaquark" and the first-ever pair of "tetraquarks." The findings, presented recently at CERN on July 5, add three members to the list of new hadrons found at the LHC.

The research will help physicists better understand how quarks connect, or bind together, to make composite particles.

Quarks are particles that usually combine in groups of twos and threes to form hadrons such as the protons and neutrons that make up atomic nuclei.

More rarely, however, they can also combine into four-quark and five-quark particles. These are called tetraquarks and pentaquarks.

"Finding new kinds of tetraquarks and pentaquarks and measuring their properties will help theorists develop a unified model of exotic hadrons..." Exotic is a term that means unusual.

Parkes said the exact nature of these exotic particles was unknown. He added that the new discoveries will also help scientists better understand already discovered hadrons.

Physicist Niels Tuning said in a statement that the more careful studies "we perform, the more kinds of exotic hadrons we find."

Tuning added, "We're witnessing a period of discovery similar to the 1950s..." During that time, new subatomic particles were being discovered which led to new ideas about subatomic physics.

John Russell adapted this story from a Reuters report and information on the CERN website.

particle – n. any one of the very small parts of matter (such as a molecule, atom, or electron)

beam – n. a line of energy, particles, etc., that cannot be seen; a line of light coming from a source (such as the sun or a headlight)

quark – n. (physics) any one of several types of very small particles that make up matter

hadron – n. a composite subatomic particle made of two or more quarks

composite – adj. made of different parts or elements

proton – n. (physics) a very small particle of matter that is part of the nucleus of an atom and that has a positive electrical charge

neutron –n. (physics) a very small particle of matter that has no electrical charge and is part of the nucleus of all atoms except hydrogen atoms

nucleus – n. (physics) the central part of an atom that is made up of protons and neutrons; plural - nuclei