Scientists Search for Dark Matter in Old US Gold Mine

Update Required To play the media you will need to either update your browser to a recent version or update your Flash plugin.
By Bryan Lynn
14 July 2022


Researchers have begun a new search in the United States for the mysterious material known as dark matter.

Scientists believe dark matter makes up most of the mass of the universe. But they have not yet directly observed the material. Astronomers have theorized that dark matter exists because of gravity's observed effects on galaxies and groups of galaxies.

The search is happening in a former gold mine in the midwestern state of South Dakota. The experiment aims to isolate dark matter inside a tank that is about one-and-one-half kilometers underground. 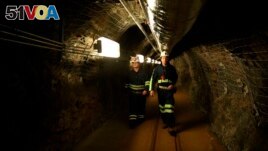 Two researchers walk through an old mining tunnel to what is now the Sanford Underground Research Facility in Lead, S.D., on Dec. 8, 2019. The laboratory houses a dark matter detector. (AP Photo/Stephen Groves)

Scientists have designed the experiment to block out nearly all cosmic rays and particles believed to move through our world every day. The hope is that by blocking these materials, dark matter particles will show up in the isolation tank.

The experiment, called LUX-ZEPLIN, is being carried out in the Sanford Underground Research Facility. If it succeeds, the team said, dark matter will produce a reaction involving the element xenon. The researchers said dark matter would produce a flash of light and be seen by a device called a "time projection chamber."

Scientists recently announced that the five-year, $60 million search effort finally got started after delays caused by the COVID-19 pandemic.

Members of the search team said the device has not yet identified dark matter. But the equipment does appear to be keeping out most of the background radiation the researchers had hoped to block.

"To search for this very rare type of interaction, job number one is to first get rid of all the ordinary sources of radiation, which would overwhelm the experiment," said project member Carter Hall. He is a physicist at the University of Maryland.

The researchers said they expect only a few signs of dark matter to appear a year. The team of 250 scientists estimates the operation will produce 20 times more data in the future.

During the experiment, the chance of finding dark matter with the device is "probably less than 50 percent, but more than 10 percent," said Hugh Lippincott. He is a physicist and spokesman for the project.

Kevin Lesko is a physicist at the U.S. Department of Energy's Lawrence Berkeley National Laboratory in Berkeley, California. He told The Associated Press that finding dark matter is far from a sure thing. But Lesko said the scientists "need a little enthusiasm" to keep going. "You don't go into rare search physics without some hope of finding something."

Another team member, physicist Aaron Manalaysay, explained the importance of xenon to the experiment. He said the element will permit researchers to see whether particle collisions that happen in the tank hit a xenon electron or its nucleus. If something hits the nucleus, it is more likely to be the dark matter that everyone is looking for, Manalaysay said.

The scientists tried a similar, smaller experiment at the same place years ago. After that experiment produced no dark matter, the scientists decided to go much bigger. Another large experiment is currently being carried out in Italy. The scientists running that project have not yet announced any results.

Manalaysay explained that even with a small chance of success, it is important for scientists to keep searching. He said this is because it will be nearly impossible to fully understand the history and development of the universe without identifying dark matter.

cosmic ray – n. high-energy particles that move through space at nearly the speed of light

chamber – n. a contained room or closed space used for a particular purpose

ordinary – adj. not special, different or unusual in any way

overwhelm – v. to give too much of a thing to someone

enthusiasm – n. the feeling of being very interested in something and wanting very much to be involved in it