Update Required To play the media you will need to either update your browser to a recent version or update your Flash plugin.
By John Russell
21 July 2022


Researchers have discovered a new kind of black hole – one that is not only dormant but also appears to have been born without the explosion of a dying star.

Researchers said recently that the black hole is different from all other known black holes. It is "X-ray quiet" - meaning it does not release powerful X-ray radiation. The presence of x-rays would suggest the black hole was taking in nearby material with its strong gravitational pull. And this black hole was not born in a kind of explosion called a supernova.

Black holes are dense objects with gravity so strong not even light can escape them. 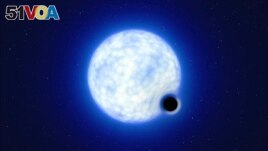 An artist's impression showing what the binary star system VFTS 243 – containing a black hole and a large luminous star orbiting each other - might look like if we were observing it up close is seen in this undated handout image. ESO/L. Calcada/Handout via REUTERS

The newly discovered black hole has a mass at least nine times greater than our sun. It was discovered in the Tarantula Nebula, a huge gas cloud in the Large Magellanic Cloud galaxy. It is about 160,000 light years from Earth. A light year is the distance light travels in a year.

A very bright and hot blue star with a mass 25 times that of the sun orbits with the black hole in a stellar marriage. This double system is named VFTS 243. The researchers believe the companion star will become a black hole and could join with the other one after a long period of time.

Dormant black holes are thought to be relatively common. But they are hard to find because they have very little to do with their surroundings. Numerous proposed candidates have been ruled out with further study, including by members of the team that discovered this one.

Tomer Shenar of Amsterdam University was the lead author of the study that was published in Nature Astronomy.

Shenar described the difficulty of finding dormant black holes by saying, "We identified a needle in a haystack."

Study co-writer Kareem El-Badry of the Harvard & Smithsonian Center for Astrophysics said: "It's the first object of its kind discovered after astronomers have been searching for decades."

The researchers used six years of observations from the European Southern Observatory's Very Large Telescope based in Chile.

It is typically assumed that the collapse of massive stars into black holes is associated with a powerful supernova explosion. In this case, a star perhaps 20 times our sun's mass blew some of its material into space, then collapsed in on itself without an explosion.

The shape of its orbit with its companion offers evidence for the lack of an explosion.

"The orbit of the system is almost perfectly circular," Shenar said.

Had a supernova taken place, the explosion's force would have pushed the newly formed black hole in a random direction and created an elliptical rather than a circular orbit, Shenar added.

Study co-writer Julia Bodensteiner of the European Southern Observatory in Munich said that black holes can pull in large amounts of material if there is something close to them.

"Usually, we detect them if they are receiving material from a companion star, a process we call accretion," Bodensteiner said.

Shenar added, "In so-called dormant black hole systems, the companion is far enough away that the material does not accumulate around the black hole to heat up and emit X-rays. Instead, it is immediately swallowed by the black hole."

dormant – adj. not doing anything at this time; not active but able to become active

stellar – adj. of or relating to the stars

companion – n. a person or animal you spend time with (sometimes used figuratively)

astronomer – n. a scientist who studies of stars, planets, and other objects in outer space

random – adj. chosen or done without a plan or design