Update Required To play the media you will need to either update your browser to a recent version or update your Flash plugin.
By Bryan Lynn
11 December 2021


A Palestinian soccer team has been formed with players who have lost limbs as a result of fighting between Israeli and Palestinian forces.

It is the first Palestinian national soccer team of its kind. The players say the organization helps them deal with the physical and mental effects of their war wounds.

The players come from a population that has grown in recent years, as fighting intensified between Israel and the Palestinian Authority's Hamas rulers. Hamas is an Islamic militant group. 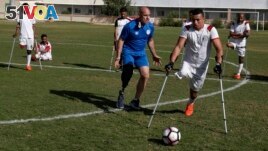 One of the players is 41-year-old Ziad Abu Halib. He lost his right leg in 2008 during the first Israel-Hamas war and has been on the team since 2019. He told The Associated Press he has never missed a training session or game. "We feel we have something, we can give something," Abu Halib said.

The rules are governed by the World Amputee Football Federation. Players leave their prosthetic limbs off the field and use crutches to move around. The crutches cannot be used to direct the ball.

The International Committee of the Red Cross worked with the Palestinian Amputee Football Association to set up the national team.

The players hope to compete with teams from other countries. They are seeking to take part in the 2022 Amputee Football World Cup in Turkey next October. This will require them to attend qualifying competitions in Iran in March. They will be able to make the trip if the border opens to permit them to travel through Egypt.

Simon Baker is a Red Cross advisor and creator of the Irish Amputee Football Association. He recently oversaw the final training session of the season in the Gaza Strip. His job was to choose 20 players from a group of 47 representing different Gaza teams.

"They were tested (for) speed, agility, fitness and also looking at the skill," Baker said. "We want the player that has everything" and is also a team player, he added.

Gaza is home to an estimated 1,600 amputees out of a population of more than 2 million.

Baker first visited Gaza in 2019, as violent protests were taking place along the territory's heavily-guarded border with Israel. His goal was to create a whole league for amputees. He spent time training players and officials and was able to organize a league with five teams and more than 100 players. He also started a league for younger amputees, which includes players as young as 5 years old.

Baker stays away from discussing politics. He told the AP his main goal is "to create an environment whereby the players come to the field and they leave the trauma behind."

amputee – n. a person who has lost an arm or leg

prosthetic – n. an artificial body part, such as an arm, leg or foot, that replaces a missing part

crutches – n. sticks with a handle that help people with foot or leg injuries walk

qualify – v. to succeed in getting into a competition

agility – n. the ability to move your body quickly and easily

league – n. a group of sports teams that take part in competitions with each other