Update Required To play the media you will need to either update your browser to a recent version or update your Flash plugin.
By Gregory Stachel
09 December 2021


The World Health Organization, or WHO, says the COVID-19 crisis has interfered with efforts to control the disease of malaria. Insects called mosquitoes spread the dangerous sickness when they bite people. 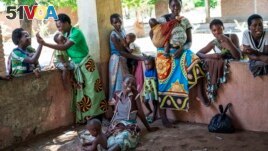 In this file photo taken on December 11, 2019, locals of the Malawi village of Tomali wait to have their young children become test subjects for the world's first vaccine against malaria. (AP Photo/Jerome Delay)

Around 65 percent of the additional deaths, about 47,000, were linked to COVID-related "disruptions" in medical supplies. Around 95 percent of all malaria cases and deaths in 2020 were in African countries south of the Sahara desert.

The WHO noted that the malarial situation last year did not get as bad as the agency had thought it might. Some predictive models had shown malaria deaths rising by 100 percent in 2020.

"The first message, in many ways is a good news message," said Pedro Alonso, Director of the WHO Global Malaria Program. The "doomsday scenario has not materialized," he added, praising the work of affected countries and their partners as the reason.

But the 2021 Global Malaria Report still warns that progress against malaria has slowed in recent years. Around 25 countries have shown increases in deaths related to malaria since 2015.

Alonso said the world is "not on a trajectory to success," in the malaria fight right now. And, he added, "How things will evolve over the coming weeks and months I wouldn't dare to say at this point."

Jamey Keaten reported this story for The Associated Press. Gregory Stachel adapted it for VOA Learning English. Caty Weaver was the editor.

disrupt – v. to cause (something) to be unable to continue in the normal way: to interrupt the normal progress or activity of (something)

doomsday – n. the day the world ends or is destroyed

trajectory – n. a process of change or development that leads toward a particular result