Some Governments Encourage Bicycle Use As Lockdowns End

Update Required To play the media you will need to either update your browser to a recent version or update your Flash plugin.
By John Russell
07 May 2020


Some governments are urging people to avoid unsafe crowding on trains and buses by riding bicycles. The suggestion comes as countries ease coronavirus-based restrictions on business and other activities.

But cycling activists say governments could do more. And some people are not welcoming of bicycles.

Governments urging for bike use

Countries and cities across the world are considering how bicycles can help their economies open up again.

In Bogota, Mayor Claudia López has urged everybody returning to work this week to cycle to their jobs instead of using public transportation.

The French government has asked cycling activist Pierre Serne to create a plan for when its lockdown ends on May 11. His suggestions include the creation of bicycle lanes separated from other vehicles. The estimated cost for such a change is 50,000 euros per kilometer.

It is unclear if the French government will accept Serne's ideas. For now, France has said it will give riders as much as 50 euros, nearly $55, for bicycle repairs.

In Berlin, Germany, the Friedrichshain-Kreuzberg council painted yellow lines on some roads to define them as bike only, taking the space from existing car lanes. This bike system builds on what is called "tactical urbanism," city developments that are low-cost, simple and easy.

From Germany to Peru, cycling activists want to make more changes for travelers on two wheels. As cities open up across the world, they see a more important way to involve bicycles. 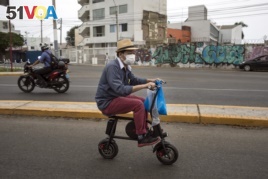 FILE - In this April 11, 2020, file photo, a man wearing a protective face mask as a precaution against the new coronavirus, rides on an electric bike in Lima, Peru. Cycling activists from Germany to Peru are trying to use the moment to get more bike lanes, or widen existing ones, even if it is just a temporary measure to make space for commuters on two wheels. (AP Photo/Rodrigo Abd, File)

The move to more bike-friendly environments "is necessary if we want our cities to work," Kabell said.

He added, "A lot of people will be afraid of going on public transportation, but we have to get back to work someday. Very few of our cities can handle more car traffic."

In addition to separate bike lanes, Kabell is pushing for government financial support for electric bicycles. Such support would persuade commuters who have more difficult journeys to use bikes.

Cycling supporters say many minds still must be changed. They note that many officials have called for more use of private vehicles during the lockdown.

In Britain, where people are still permitted to leave home to exercise, cycle shops have remained open during the lockdown that began March 23.

But in Spain, the government closed such shops, but permitted gasoline stations to remain open.

And while bike-sharing in London and Paris was provided free to health care workers, most Spanish cities shut down the services, saying they would help spread the coronavirus.

Still, bicycles are not accepted everywhere. Juan Pasamar lives in Zaragoza, Spain. He said police stopped him as he traveled to work on a bicycle.

"The attitude of the police is the attitude that many people show in the streets," said Pasamar, who keeps riding, even at the risk of being stopped again. He said, "Bicycles are for many just a nuisance."

Aritz Parra reported on this story for the Associated Press. John Russell adapted it for Learning English. Caty Weaver was the editor.

lane -- n. : a part of road that is marked by painted lines and that is for a single line of vehicles

handle – v. to deal with (a person, situation, etc.) successfully

glove -- n. a covering for the hand that has separate parts for each finger

attitude -- n. the way you think and feel about someone or something

nuisance – n. a person, thing, or situation that is annoying or that causes trouble or problems — usually singular