Update Required To play the media you will need to either update your browser to a recent version or update your Flash plugin.
By Bryan Lynn
09 February, 2019


Legos continue to be one of the most popular toys for children around the world.

Many fun and interesting things can be created with these plastic, colored building blocks.

Sometimes, Legos can even build some very useful things. One such example was created by a Spanish man, whose love for Legos began as a young child.

David Aguilar, now 19, has spent many years playing – and building things – with Legos.

Aguilar was born without a right forearm because of a genetic condition. "As a child I was very nervous to be in front of other guys because I was different," Aguilar told the Reuters news agency. "But that didn't stop me from believing in my dreams."

One dream he had was to build his own prosthetic arm out of Legos.

Aguilar is currently a university student in bioengineering at UIC Barcelona in Spain. He is now using his fourth model of the Lego creation. He says his next dream is to design low-cost robotic arms and legs for people in need. 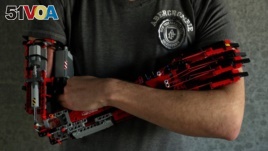 David Aguilar poses with his prosthetic arm built with Lego pices during an interview with Reuters in Sant Cugat del Valles, near Barcelona, Spain, on February 4, 2019. (Reuters/Albert Gea)

Aguilar's first attempt at creating a prosthetic arm came when he was nine years old. He says this first version was a simple design with very limited abilities. He built his first fully operational robotic arm at age 18. It had a movable elbow joint and tool for picking things up powered by an electric motor.

Each new version has added improved possibilities for arm movements. His newest Lego inventions also permit him to pick up and carry heavier objects.

Aguilar told Reuters it is nice to be able to wear the prosthetic arm because he likes the feel of having two hands. But he said he does not use the arm all the time because he has learned to do many of his daily activities without it.

All the prosthetic arm versions are kept inside his room at school. The latest models are marked MK, followed by a series number. The name is meant to honor one of Aguilar's favorite superheroes, Iron Man.

Aguilar shows off some of his Lego creations on his own YouTube channel, named "Hand Solo." In one of his videos, he demonstrates the MK-III. He calls it "the best one yet."

In some of his videos, Aguilar aims to show people with disabilities that nothing is impossible. He wants them to know that they, too, can reach their goals and dreams. He would even like to help provide needed equipment for some of them.

"I would try to give them a prosthetic, even if it's for free, to make them feel like a normal person, because what is normal, right?"

toy – n. object for children to play with

forearm – n. the lower part of the arm between the wrist and the elbow

prosthetic – adj. an artificial body part, such as an arm or leg

disability – n. a physical or mental condition that makes someone unable to act in a way considered usual for most people