Update Required To play the media you will need to either update your browser to a recent version or update your Flash plugin.
By Dan Friedell
19 February, 2017


Most college students would love to get an assignment like the one Madeline Ota recently received at Stanford University.

She and her classmates were asked to make beer in their dorm rooms.

But before you get too excited, you need to know that it was for a class called The Archaeology of Food. And the assignment was to make beer according to a 5,000-year-old Chinese recipe.

"I think it was a bit different than beers that you would buy in the store because it only had a week to ferment, and I think that is one of the biggest differences that you would notice in taste. Because after only a week, alcoholic content isn't very strong."

Ota and her classmates made two kinds of ancient beer, some of which are still being made by indigenous people today. One of the beers was made by grinding grains like wheat, millet or barley.

The other was made using a root known as manioc, or cassava, in different parts of the world. The students chewed the root and then spit it into glass containers. Their saliva began the fermentation process.

Water and heat were carefully added to each mixture.

Ota said she has a new appreciation for what goes into making the beer people buy at stores or at the local bar.

"This is not something we should take for granted when we go and pick up something from the store. And you know, that doesn't just apply to beer, but kind of any sort of processed food. There is a whole story behind how this got to where it is, how people produced it, how they cooked it..."

Liu and a graduate student, Jiajing Wang, "reverse engineered" their beer recipe based on substances found in clay pots from northeast China. That means they studied the residue and made guesses as to what the original ingredients might have been.

The researchers found evidence of barley, an important grain in making beer today. Until Liu and Wang did their research, most historians thought barley arrived in China more recently. 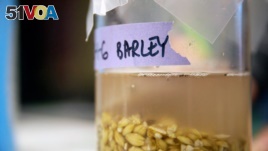 A close-up shot of the beer Stanford students recently made following an ancient Chinese recipe.

Ota said we can learn a lot about ancient cultures by learning about their food and beer.

"You know, when the first people started actually having farms and agricultural societies, very soon after that they actually started making the first alcohols using various techniques. Having alcohol became a very culturally significant and religious experience for many communities and it went on to become an important part of their society."

Because the class treated the beer making like a science project, they were able to add their information to the scientific record. Every ingredient was carefully measured. Every degree of heat was noted.

Thanks to the students, there is now a very specific record for how to make these ancient beers. In the past, the instructions might have been "fill the pot with water," Ota said. But no one ever knew how big the pot was or how much water was used.

But the most important question is: How did the beer taste?

The beer made from grain, Ota said, was fruity, like a cider. The one from manioc root smelled so bad – like cheese – she didn't want to try it.

Would you like to try to make the beer the students at Stanford made? We want to know. Write to us in the Comments Section or on 51VOA.COM.

assignment– n. a job or duty that is given to someone : a task someone is required to do

dorm – n. a building on a school campus that has rooms where students can live

archaeology – n. a science that deals with past human life and activities by studying the bones, tools, etc., of ancient people

ferment – v. to go through a chemical change that results in the production of alcohol

take for granted – v. to fail to properly notice or appreciate (someone or something that is helpful or important to you)

residue – n. a usually small amount of something that remains after a process has been completed or a thing has been removed

cider – n. an alcoholic drink made from apples

bar – n. a building or room where alcoholic drinks and sometimes food are served

reverse engineer – v. to study the parts of (something) to see how it was made and how it works so that you can make something that is like it