Update Required To play the media you will need to either update your browser to a recent version or update your Flash plugin.
By Dorian Jones
29 May, 2015


Turkey will hold elections in June. Before then, a Turkish government lawyer wants to close several TV stations linked to Islamic cleric Fethullah Gulen and critical of the ruling AK Party.

Government officials claim Mr. Gulen is working against the government.

But critics are speaking against the government's move to close the stations. They say the state controls the media in order to report in favor of the government. 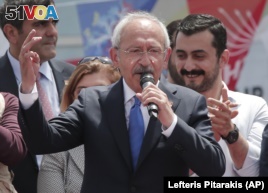 Cengiz Aktar is a political scientist at Istanbul's Suleyman Sah University. He says closing the TV stations would add to growing concerns over the fairness of the June 7 general election.

"It will lessen the media outlets capable of reporting properly what is really happening during the campaign. Already it is extremely difficult to talk about a free election because the majority of the media outlets are openly working for the ruling party and press freedom is under very serious threat as pointed [out] by European Union ... by [the] Council of Europe and by America."

The Organization for Security and Co-operation in Europe, OSCE, is observing the election. OSCE is concerned about the fairness of the media.

Kemal Kilicdaroglu is the leader of the main opposition Republican People's Party. He has strongly condemned any threat to close TV stations.

And some pro-government newspaper writers are also worried about the threat.

The ruling AK Party has not commented on the reports.

President Erdogan is a founding member of the ruling party. He is required by the Turkish Constitution to be neutral.

But since the start of the general election, President Erdogan has spoken around the country. In his speeches he often attacks all the opposition parties.

State media and many private TV channels carry the speeches live. Observers say that, in contrast, the opposition has few chances to speak on television.

"There might be such a perception or a feeling that AK Party has more weight since our president is also out in the field. But he is the first ever president who was elected by the nation's votes."

Kadri Gursel works as a political reporter at Turkey's Milliyet newspaper. He warns the country is moving into a "crisis of justice."

"There is no legal body to stop and punish violation of the constitution, violation of electoral law and limited access of opposition parties to mainstream media. And then it's enough to create an authoritarian system, which makes it almost impossible for an opposition parity to make gains in elections."

Related reports say the government is giving tax benefits to large businesses. The reports say the companies, which own large media operations, received the tax credits in the period before the election.

The ruling AK Party has strongly denied claims that they acted illegally. But national and international concerns are increasing over the health of democracy and the June election.

found - v. to begin or create (something that is meant to last for a long time)

neutral - adj. not supporting one political view over another

perception - n. the way you think about or understand someone or something

Now it's your turn. What do you think of the relationship between the media and government? Is the media in your country neutral or does it favor those in power?