Update Required To play the media you will need to either update your browser to a recent version or update your Flash plugin.
By John Russell
09 January 2022


A recent study found that Americans who completed college or university are more likely to have friends and are less lonely than those who only finished high school.

The findings come at a time when many Americans question whether a college degree is worth its cost.

Daniel Cox is director of the Survey Center on American Life and a senior fellow at the American Enterprise Institute. He said that, in general, Americans are experiencing a "friend recession," meaning a decline in their number of friends. 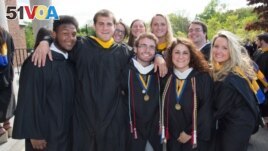 Cox noted that "Americans have fewer close friends today than we did in the early '90s. But some groups were particularly affected in that they seem to have experienced a much more dramatic decline over that time period."

He added, "And there are two groups that really stood out. The first is men. And the second one is people without a college degree."

The Survey Center on American Life questioned 5,054 people this past summer. It found that Americans with a college degree feel more socially connected and are more active in their communities than people who did not go to college. As a result, those who completed college report feeling less lonely.

Cox believes that the issue is a result of the decline in "traditional institutions," meaning religion, marriage, and unions.

"Unions were primarily financial, but they also offered a lot of social support and social connection and feelings of belonging as well. The decline of unions, the decline of marriage and the decline of religion have all disproportionately affected the noncollege group.""

Disproportionately, in this case, means too large in relation to something.

A 2012 study found that college-educated women were much more likely to get married than women who dropped out of high school.

Cox points to research that shows that people who are married are more likely to have larger social groups and more close friends and report feeling lonely less often.

Those numbers were different in 1990, when marriage rates among the college educated were at 69 percent, compared with 63 percent for those who did not go to college, says a Pew research report.

Pew also finds that Americans are less religious overall. The percentage of Americans who say they're "religiously unaffiliated" rose from 17 percent in 2009 to 26 percent in 2018 and 2019.

When it comes to unions, the percentage of workers who belong to a union has declined by almost half since 1983, when 20 percent of U.S. workers were union members. Union membership had dropped to 10.8 percent by 2020.

Dora Mekouar reported on this story for VOA News. John Russell adapted it for Learning English.

decline -- n. the process of becoming worse in condition or quality

primarily – adv. used to indicate the main purpose of something, reason for something, etc.