Update Required To play the media you will need to either update your browser to a recent version or update your Flash plugin.
By Ashley Thompson
02 October 2022


For about a year, 16-year-old Adismarys Abreu had been thinking about the possibility of getting a long-lasting birth control device. She was seeking a solution to her increasing pain during her monthly menstrual period.

Then in June, the U.S. Supreme Court overturned Roe. v Wade. The ruling ended a 50-year-old legal right to abortion nationwide. Abortion is a medical procedure to end a pregnancy. Abreu joined a growing number of young women rushing to their doctors as states began to ban or severely limit abortion.

"I'm definitely not ready to be pregnant," Abreu said. Her home state of Florida bans most abortions after 15 weeks. She decided in August to have a contraceptive device put into her arm. 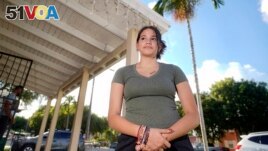 Adismarys Abreu, 16, poses for a photo at her home, Tuesday, Aug. 23, 2022, in Miami. Abreu had been discussing a long-lasting birth control implant with her mother for about a year as a potential solution to increasing menstrual pain. (AP Photo/Wilfredo Lee)

Experts say the Supreme Court's ruling appears to be adding to the movement of increased use of birth control devices and medication among teenagers.

The nonprofit reproductive health organization Planned Parenthood has been flooded with questions about birth control. Doctors across the country have reported rising demand for birth control even among teenagers who are not sexually active.

Some patients are especially fearful because the new abortion laws in several states do not include exceptions for sexual attack.

"Please, I need some birth control in case I get raped," patients tell Dr. Judith Simms-Cendan. She is a gynecologist for young women and girls in Miami, Florida. The state does not provide exceptions to abortion for rape if the pregnancy is beyond 15 weeks.

Simms-Cendan said parents who might have been resistant in the past now want to discuss birth control as a choice for their daughters.

"It's a sea change of, ‘I don't have room to play. We have got to get my child on something,'" Simms-Cendan said.

Teenagers were already switching to more effective long-acting forms of birth control before the June ruling, said Laura Lindberg. She is a professor at Rutgers University's School of Public Health in New Jersey. Her research found the number of 15- to 19-year-olds using such birth control methods rose to 15 percent during the period of 2015 to 2019. That is up from 3 percent during the 2006 to 2010 period.

No national data is available for the months since Roe was overturned, Lindberg said. But she said "major ripple effects" are expected from the loss of abortion availability in many states.

After the high court's ruling, Missouri was among the first states in the country to put a law in place banning abortion at any point in pregnancy. Dr. David Eisenberg practices medicine in the state. He said he has seen a sense of urgency from college-aged women to have the most effective birth control choice.

"They understand the consequence of a contraceptive failure might mean they become a parent because they might not be able to access an abortion," Eisenberg said.

Interest is also high at a health center that Dr. Elise Berlan oversees in Columbus, Ohio. Before the Supreme Court's decision, the center could make appointments for new patients within a week or two. Now, they are reserving appointments several months in advance. The demand is so high that the center is adding another doctor, said Berlan.

The growing interest exists even in states like North Carolina, where abortion remains legal. The state's legislature, however, is conservative. This means state leaders are more likely to attempt to pass a ban on abortion in the future.

Dr. Kavita Arora is a gynecologist in the North Carolina city of Chapel Hill. She said she has been seeing many more teenage patients than before the overturn of Roe.

"They're aware that this is an incredibly fluid situation, and what is allowed at one moment may not be allowed a week or a month later," said Arora.

That unclear future is part of what led Adismarys Abreu to seek out her new birth control device, which can prevent pregnancy for up to five years.

"I don't know what's going to happen with the laws in that time period," Abreu said. "Having this already in my arm, it makes me feel so much safer."

menstrual period - n. the time when a woman menstruates each month (menstruate: to have blood flow from your body as part of a process that happens each month)

contraceptive - n. a drug or device (such as birth control pills or a condom) that is used to prevent a woman from becoming pregnant

gynecologist - n. a doctor who deals with the diseases and routine physical care of the reproductive system of women

switch - v. to make a change from one thing to another

ripple effect - expression. a situation in which one event causes a series of other events to happen

aware - adj. knowing that something (such as a situation, condition, or problem) exists

fluid - adj. used to describe something that can change easily or that changes often