Update Required To play the media you will need to either update your browser to a recent version or update your Flash plugin.
By Caty Weaver
04 September 2022


The world is full of tea drinkers. For many, they simply enjoy the taste. But new research suggests tea might help those who drink it live longer than those who do not.

Scientists from the United States National Cancer Institute carried out the study. They examined years of data gathered about the tea drinking behavior of almost 500,000 adults in Britain for as many as 14 years. Black tea is the most common kind of tea in Britain. 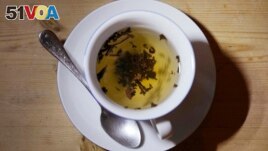 This photo shows a cup of black tea with a spoon and tea leaves in London, Monday, Aug. 29, 2022. (AP Photo/Alastair Grant)

The researchers adjusted for risks that individual may have related to health, living conditions, diet and lifestyle choices, as well as age, race and gender.

The study found that high tea intake — two or more cups a day — was linked to a moderate benefit: a nine to 13 percent lower risk of death from any cause than non-tea drinkers.

The research was published in Annals of Internal Medicine. The scientists say the lowered risk of death held true for study subjects with heart disease. However, researchers said there was no clear finding in connection with deaths from cancer. Researchers were not sure why. But, it is possible there were too few confirmed cancer deaths to measure, said Maki Inoue-Choi, who led the study.

Experts at the U.S. National Institutes of Health say polyphenols are thought to be responsible for the health benefits that have traditionally been linked to tea, especially green tea.

The study of British tea drinkers was based on observing people's behaviors and health. This kind of methodology cannot prove cause and effect.

"Observational studies like this always raise the question: Is there something else about tea drinkers that makes them healthier?" said Marion Nestle. She is a professor of food studies at New York University.

The study does not offer enough evidence to advise people to change their tea behaviors, said Inoue-Choi.

"If you drink one cup a day already, I think that is good," she said. "And please enjoy your cup of tea."

inflammation - n. a bodily response to injury or disease in which heat, redness, and swelling are present

adjust - v. to change (something) in a minor way to make it work better

diet - n. the food and drink that a person or animal usually takes

digestive - adj. relating to or functioning in the body's process of changing food into simpler forms that can be taken up and used

cup - n. a rounded container to drink from