Update Required To play the media you will need to either update your browser to a recent version or update your Flash plugin.
By Bryan Lynn
23 August 2022


Pfizer has sought government approval for a new combination COVID-19 vaccine that aims to protect against new virus versions.

The American drug maker officially requested the approval on Monday. The combination vaccine seeks to target new mutations of the Omicron version, or variant, of COVID-19.

The latest mutations, or "sub-variants," have been identified as BA.4 and BA.5. Omicron and another virus version, Delta, spread especially widely across the world. 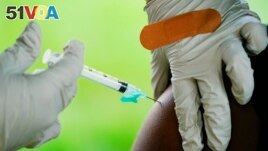 In this file photo, a health worker administers a dose of a Pfizer COVID-19 vaccine during a vaccination clinic in Reading, Pa., Sept. 14, 2021. (AP Photo/Matt Rourke, File)

Research has shown that the two sub-variants are better at avoiding the protection developed in people who were vaccinated or infected before.

The U.S. Food and Drug Administration (FDA) had ordered vaccine makers to target the BA.4 and BA.5 sub-variants to prepare for new booster campaigns in the autumn.

The two most widely used COVID-19 vaccines – one made by Pfizer and its partner BioNTech and the other by Moderna – have saved millions of lives worldwide. But medical researchers have urged drug companies to update their vaccines as the virus continues to mutate into new variants and sub-variants.

Pfizer-BioNTech aims to offer updated boosters to individuals 12 and older. The shots could begin within weeks if the FDA quickly approves the vaccine, The Associated Press reports.

Moderna is expected to also seek government approval soon for a new combination vaccine. The United States has a contract to buy 105 million of Pfizer's shots and 66 million Moderna ones.

"It's going to be really important that people this fall and winter get the new shots," Dr. Ashish Jha told reporters last week. He is chief of COVID-19 policy for U.S. President Joe Biden. Jha added that the new combination vaccines are "designed for the virus that's out there."

Health officials say the BA.5 sub-variant is currently causing almost all COVID-19 infections in the U.S. and much of the world. But health experts say there is no way to know whether it will still be a threat this winter or if another mutation will replace it.

The vaccines currently used in the U.S. still offer strong protection against severe disease and death, especially if people have received booster shots. But those vaccines target the COVID-19 version that started widely spreading in early 2020.

The current COVID-19 vaccines work by causing the production of antibodies that recognize and attack the so-called "spike protein" that surrounds the virus. The new combination vaccines will contain instructions for both the original spike target, as well as spike mutations carried by BA.4 and BA.5.

The Pfizer-BioNTech request comes after Britain recently became the first nation in the world to approve a different update to Moderna's COVID-19 vaccine.

While considering the U.S. approval request, the FDA is expected to depend heavily on scientific testing of past changes to the vaccine formula. This process is similar to how vaccines for the influenza virus are updated yearly. They do not require large research studies.

Pfizer and BioNTech have said they expect to start new trials involving BA.4 and BA.5 booster shots in the coming weeks. Moderna has begun a similar study, but those results are not expected to be available before a fall booster campaign.

In another development, Pfizer announced that trials of its COVID-19 vaccine showed the shots were 73 percent effective in protecting children younger than 5 during testing in the spring.

mutate – v. to cause a gene to change and create an unusual characteristic in a plant or animal

booster – n. an extra amount of a substance (called a vaccine) that is injected with a needle into a person or animal to help protect against a particular disease

update – v. to add new information to something or make something more current

formula – n. a list of substances that something is made of