Update Required To play the media you will need to either update your browser to a recent version or update your Flash plugin.
By Gregory Stachel
07 August 2022


Researchers say experiments on pig tissue suggest that tissue can be preserved and cells can regain the ability to work an hour after death.

The study, by a team of Yale University researchers in the United States, recently appeared in the scientific publication Nature.

The researchers suggested that their experimental technology could help increase the number of organs available to patients who need organ transplants. 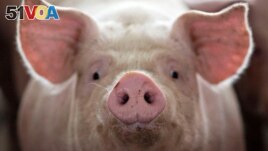 In the experiment, the researchers stopped the hearts of several pigs. After an hour, the animals were attached to a specialized machine which pumped a blood substitute through their bodies. The fluid contained some blood and about 13 chemicals meant to support cell activity and decrease inflammation.

Six hours later, the treatment had reduced or cancelled some of the damage that resulted from lack of oxygen when the heart stopped pumping blood. For example, organ inflammation and collapsed blood vessels had reduced or were corrected, the scientists said.

The researchers call the treatment OrganEx.

The results showed that when the heart stops, the body is "not as dead as we previously assumed," Zvonimir Vrselja said. He is one of the writers of the Yale University study who spoke with reporters. He added, "We were able to show that we can persuade cells not to die."

In the study, the scientists said genetic examination of the tissue suggested that the process of repairing cells began once circulation was brought back.

The researchers said that during the experiment, the pigs showed no evidence of electrical activity in the brain.

They hope OrganEx will permit increased use of organs taken after withdrawal of life support from donors with severe brain injuries they cannot recover from. Their aim is to prevent damage to organs that happens when blood stops circulating.

Currently, organs taken from brain-dead donors who were taken off life support systems do not perform as well as those taken from such donors with circulating blood.

Using OrganEx on human organs, however, could be years away.

Stephen Latham is of Yale's Interdisciplinary Center for Bioethics. He said the result of the study "stops far short of saying that any organs were restored to the level of function" necessary to support life.

Some observers are suggesting that, in theory, the technology could someday be used to bring someone who has just died back to life.

Latham said, "In order to do that, there's a great deal more experimentation that would be required." He added, "And you'd have to think about what is the state to which a human being would be restored."

transplant – v. to perform a medical operation in which an organ or other part that has been removed from the body of one person is put into the body of another person

vessel – n. a vein or artery that carries blood through the body

donor – n. a person who gives something (such as blood or a body organ) so that it can be given to someone who needs it

function –n. the activity, purpose or job that something or someone does