Dogs, Cats Get Wearable Fan to Beat the Heat in Japan

Update Required To play the media you will need to either update your browser to a recent version or update your Flash plugin.
By Hai Do
02 August 2022


A Tokyo clothing maker has worked with an animal doctor to create a wearable cooling device for house pets like dogs and cats.

The company hopes that the fan will help pets that cannot drop their fur coats during Japan's boiling hot summer weather.

Rei Uzawa is president of clothing maker Sweet Mommy. She wanted to create the device after seeing her pet chihuahua suffering in the heat. She said her dog was very tired every time it was taken out for a walk. 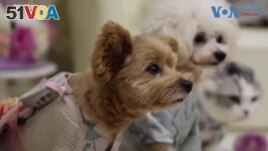 Dogs, Cats Get Wearable Fan to Beat the Heat in Japan

Uzawa told the South China Morning Post that she got her idea from seeing wearable air conditioners, like Sony's Reon Pocket. The Sony device can remove heat to cool the human body.

Sweet Mommy's device is called Cool Dog but it is good for cats, too. Uzawa said it was created under the supervision of an animal doctor at Oasis Animal Hospital. The device is a battery-powered fan. It is attached to thin material and blows air around the animal's body. It weighs about 80 grams.

"There was almost no rainy season this year, so the hot days came early, and in that sense, I think we developed a product that is right for the market," Uzawa said.

After the rainy season in Tokyo ended in late June, the Japanese capital suffered the longest heatwave on record. Temperatures up to 35 degrees Celsius were recorded for nine days.

"I usually use dry ice packs (to keep the dog cool). But it's easier to walk my dog if we have this fan," said Mami Kumamoto. She is the owner of two dogs, a small poodle named Pudding and a terrier named Maco.

The device came out in early July. Uzawa said Sweet Mommy has received around 100 orders for the product. It comes in five different sizes for a price of about $74.

Hai Do wrote this story for VOA Learning English with materials from Reuters and other sources.

fan –n. a machine that moves air around

fur –n. the hair of an animal

battery –n. a device that stores and supplies electricity