Update Required To play the media you will need to either update your browser to a recent version or update your Flash plugin.
By Christopher Jones-Cruise
24 August, 2016


Officials in Thailand are working to help the tourism industry in several provinces affected by deadly bombings earlier this month.

Bombings in several southern provinces killed or wounded more than 30 people, including foreigners.

Experts say more attacks could have a deeper effect on the industry, which is very important to the country's economy. 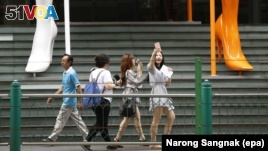 Economists at the University of the Thai Chamber of Commerce say the attacks may cause up to 365,000 fewer people to visit the provinces. And they estimate the areas could lose $170 million in revenue.

Popular beach resort areas were targeted by the attacks. They include Hua Hin, where the Thai royal family has a vacation home.

Lisa Onghang is the president of the Hua Hin Cha Am Tourism Association. She said the area is returning to normal after the shock of the bombings.

She said there were "cancellations by some Thais, but not from abroad. From abroad they just see the situation. I have many emails from our clients who seem to understand," she said.

In addition to Hua Hin, attacks by people setting fires or exploding bombs took place in six provinces. Phuket, which had almost 30 million visitors in 2015, was among the affected areas. Surat Thani, Phangna, Trang, Chumphon and Nakhon Si Thammarat also had attacks.

The World Travel and Tourism Council says tourists spend $72 billion a year in Thailand. The industry directly or indirectly employs about five million people. That is more than 14 percent of all jobs in the country.

Officials expect about 33 million people to visit Thailand this year. They say about 30 percent of them will come from China.

In 2015, the bombing of a Hindu shrine in Bangkok killed 20 people and wounded 120. Many of those killed or hurt were from Asia. Thailand's tourism revenues dropped 20 percent after the attack. The number of visitors to the country dropped sharply in the last three months of last year. The numbers have only begun to increase this year.

Sukanya Jandoo is the general manager of a Bangkok hotel and a vice president of the Thai Hotels Association. He said fewer people cancelled their planned visits after this year's attacks than did after the bombing in Bangkok in 2015.

"I would admit that yes when that kind of thing happens they would have some cancellations. But I would say it was nowhere near the magnitude of the previous tragic event [in August 2015]," he said.

Economist Somphob Manarangsan said the lack of information about the attacks and the attackers has caused people to fear more violence.

"It depends on whether it's going to happen again," he said. "I think if it is only one incident and no more like that I don't think it's going to have a big impact [on] the Thai economy, particularly the business sector."

Analysts disagree about whether the attacks are linked to politics.

The attacks happened soon after voters approved a new military-supported constitution. It is expected to increase the military's influence in the next elected parliament.

Other experts link the attacks to Muslim rebels in the provinces on the southern border with Malaysia. Peace talks between the rebels and the government have been moving very slowly.

Pornthip Hirunkate is the vice president of the Tourism Council of Thailand. She said the industry has called on the government to increase security to prevent further attacks.

"We have asked the government to take more precautions, especially security -- buildings, airports and hotels. There's more measures for security. The concern is [if there] is a repeat. That's why I think we all need...to be alert and prepared if anything happens," Pornthip said.

magnitude – n. the size, extent or importance of something

particularly – adv. used to indicate someone or something that deserves special mention