US May Reach Goal of Accepting 10,000 Syrian Refugees

Update Required To play the media you will need to either update your browser to a recent version or update your Flash plugin.
By Christopher Jones-Cruise
07 August, 2016


The United States is working to reach its goal of bringing 10,000 Syrian refugees to the country by the end of September. There has been an increase in the number of Syrian refugees entering the U.S. in the past three months.

More than 8,000 people who fled violence and persecution in Syria have been resettled in the United States between October 1, 2015 and this week. The State Department's Refugee Processing Center says half are under the age of 14.

A few hundred Syrian refugees have entered the U.S. every month since last September. U.S. Secretary of State John Kerry announced a plan to welcome them. 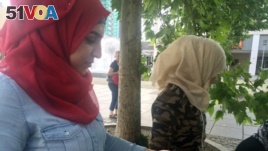 Syrian refugees who live in a camp about 90 minutes from Dresden, Germany at a city market, enjoying a day far from the camp they live in where anti-immigrant protesters hold demonstrations almost every week, July 7, 2016. (H. Murdock/VOA)

Experts had said it would be difficult to reach the goal of bringing 10,000 Syrian refugees to the U.S. by the end of September. The previous year, 1,682 Syrian refugees entered the country.

But in February, the State Department created a center in Amman, Jordan to help refugees apply to enter the U.S. The application, interviews and medical and security investigations necessary before refugees can be accepted usually take 18 to 24 months. But American officials said having the new center would reduce that time to three months.

In May, 1,069 Syrian refugees entered the United States. More than 2,000 entered in both June and July.

More refugees have been resettled in the United States than any other country. Almost 61,000 refugees have entered the U.S. since last October.

Last year, Kerry also announced that the government would increase the number of refugees permitted into the U.S. from 70,000 to 85,000. The number is set by the president after he or she receives advice from the State Department. It will increase to 100,000 in the coming year.

But many more Syrians want to enter the United States. The United Nations High Commissioner for Refugees estimates 4.8 million Syrians have fled to Turkey, Lebanon, Jordan, Egypt and Iraq. The office says 6.6 million have been displaced within Syria.

The Syrian civil war began in 2011. At that time, the U.S. was accepting only a few Syrian refugees every year. Millions of Syrians fleeing conflict and Islamic State violence across the country have been accepted by Lebanon, Jordan and Turkey.

Many Republican governors have criticized the Obama administration's decision to accept more Syrian refugees. Several state legislatures have considered bills to slow or stop the resettlement of some or all refugees in their states.

Some opponents of the refugee resettlement plan say they do not believe the security investigations of the refugees have been complete enough. The administration has said they are.

In early July, an Associated Press-GfK public opinion survey found that 69 percent of Republicans support a temporary ban on Muslim immigration. Fifty-two percent of Americans opposed such a ban; 45 percent supported it.

In September, the U.N. General Assembly will meet to discuss refugee and migrant issues. Almost one million Syrians are seeking asylum in Europe.

asylum – n. political protection given by a government to a person from another country