The Future of Handshakes

Update Required To play the media you will need to either update your browser to a recent version or update your Flash plugin.
By Ashley Thompson
15 August 2021


As workers return to the office, friends meet up and religious services move from online to in person, people are asking the question: to shake hands or not to shake hands? 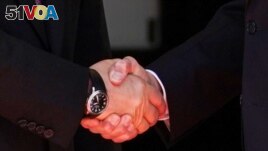 "We didn't want the sticker to say, ‘We Don't Shake Hands' because that is kind of off-putting," said John DeLeon, vice president of operations and sales at MTI Event in Kansas City. "But if someone had the sticker on in that group, then that was the indication that it was OK."

DeLeon added that those who did not want to shake hands with others could simply choose not to wear a sticker.

The handshake has been around for centuries. A widely held belief is that it started as a way to show that a person was offering peace and not holding a hidden weapon.

But hands have germs.

Dr. Anthony Fauci is America's leading infectious disease expert. Last year, he warned, "I don't think we should ever shake hands again, to be honest with you."

Dr. Amesh Adalja, another infectious disease expert, does not agree. He thinks people are overthinking the question of whether to shake hands or not. The answer, he says, is simple.

"If you are worried about COVID, the best way to make handshakes safe is to be fully vaccinated," Dr. Adalja said. "And for any other things that might be on people's hands, just wash your hands before you touch your face."

Diane Gottsman is a national etiquette expert. Etiquette means the rules that make up the correct way to behave in society. Gottsman said she does not think the handshake will go away because of the pandemic. But she said people should take things slowly.

"Don't be the first to extend your hand, even if you are comfortable," Gottsman said. "Watch the other person and allow them to extend their greeting of choice."

Former U.S. President Donald Trump has said publicly he does not like shaking hands because germs on hands can pass. However, he faced criticism in the early days of the pandemic when he continued shaking hands at public events.

The administration of President Joe Biden at first took social distancing more seriously. But following the end of federal guidance on face coverings and more widespread availability of vaccines, handshakes and even hugs returned to the White House.

Lizzie Post is the great-great-granddaughter of another etiquette expert, Emily Post. She said the country is entering a time similar to the start of the pandemic, when people wanted to know if others were socially distancing before getting close to them.

Now the question is whether family, friends and coworkers are vaccinated. Post says she likes to announce that she is vaccinated, and then ask directly whether a person wants a hug or handshake.

She does not think the handshake is going away.

"It is a really hard greeting to deny because it has been so ingrained since we were kids or young adults," Post said. "And I see that being more powerful than the past year of not practicing it..."

Business Law Southwest advises businesses in New Mexico, Arizona and Texas. At the beginning of the pandemic, it offered to help create new workplace rules — such as a no-handshake policy. But there was not enough interest, said Kristy Donahue, a company spokeswoman.

"At the end of the day," Donahue said, "people crave human interaction and human touch."

Heather Hollingsworth reported this story for The Associated Press. Ashley Thompson adapted it for VOA Learning English. Susan Shand was the editor.

sticker - n. a piece of paper with a picture or writing on it and a sticky substance on its back that is used to attach it to a surface

indication - n. something (such as a sign or signal) that points out or shows something

etiquette - n. the rules indicating the proper and polite way to behave

extend - v. to cause (something, such as your arm or leg) to straighten out or to stretch out

allow - v. to permit (something)

hug - n. the act of putting your arms around someone or something as a way of showing love or friendship

practice - v. to do (something) regularly or constantly as an ordinary part of your life

crave - v. to have a very strong desire for (something)

interaction - n. the act of talking or doing things with other people