US Expected to Approve Extra COVID-19 Vaccine Shot for Some

Update Required To play the media you will need to either update your browser to a recent version or update your Flash plugin.
By Hai Do
12 August 2021


The U.S. government's top infectious disease expert says a booster COVID-19 vaccination will be recommended for people with a weakened immune system.

Speaking to television news program CBS This Morning, Dr. Anthony Fauci said Thursday that he expected the U.S. Food and Drug Administration, or FDA, to recommend the booster shot very soon. People with a weakened immune system are those who undergo major surgery, are being treated for cancer or have other serious health conditions.

For groups such as old people, Fauci said health officials are still collecting information. But he added that "it is likely to happen at some point in the future." Fauci noted that vaccine efficacy would not last forever.

Earlier this year, the head of Pfizer told CNBC that people will "likely" need a booster shot within 12 months. And drug maker Johnson & Johnson suggested that people might need a COVID-19 shot yearly like a flu vaccine.

Fauci advised people to get the same kind of vaccine that they had received the first time. The FDA has so far approved vaccines from Pfizer-BioNTech, Moderna and Johnson & Johnson for emergency use in the United States.

The debate over a booster shot

The World Health Organization (WHO), however, said developed countries should not order additional shots for their vaccinated population. It noted that billions of people around the world have not received their first shot.

Dr. Soumya Swaminathan is the WHO's chief scientist. She said the United Nations health agency does not know of evidence showing that booster shots were necessary for fully vaccinated people. "It has to be based on the science and the data, not on individual companies declaring that their vaccines need to be administered as a booster dose," she said. 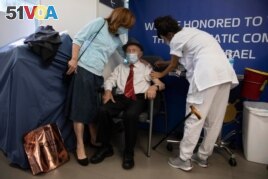 Israel has one of the world's highest vaccination rates. It has used the Pfizer-BioNTech shots. In early July, it became the first country to give coronavirus boosters to people with weakened immune systems. Israel's Prime Minister Naftali Bennett then announced that the country would offer the booster to all people over 60. He said, "like the flu vaccine that needs to be renewed from time to time, it is the same in this case."

Israel's Ministry of Health reported that, among fully vaccinated people, vaccine protection against both infection and disease had dropped from above 90 percent in December 2020 to about 40 percent by late June 2021. The publication Nature said the drop could be related to the spread of the highly infectious Delta variant of the virus.

In the United States, many parts of the country have seen a large increase of infections caused by the Delta variant. The Centers for Disease Control and Prevention, or CDC, said it represents more than 80 percent of new cases, especially in areas where fewer people are vaccinated. The CDC's investigation also showed that, in rare cases, some vaccinated people infected with the Delta variant might "spread the virus to others."

The health agency recommended vaccinations for all people 12 years and older, including people who are pregnant or might become pregnant in the future.

Many people are waiting for a decision on COVID-19 booster shots. But ABC News reported recently that more than 1 million Americans might have already gotten a third shot. That information came from a CDC document looked at by ABC.

Hai Do wrote this story for VOA Learning English. Mario Ritter, Jr. was the editor.

booster (shot) –n. an extra amount of a vaccination that is injected with a needle which is meant to give additional protection against a disease

efficacy –n. the power to produce the desired result; effectiveness

variant –n. something that is different in some way from others of the same kind