The Woman Behind the Image of the Black Hole

Update Required To play the media you will need to either update your browser to a recent version or update your Flash plugin.
By Ashley Thompson
12 April, 2019


Trying to capture an image of a black hole is like trying to take a picture of an orange sitting on the surface of the moon from Earth-- with your smartphone.

That is what Dr. Katie Bouman said two years ago during her TED talk called "How to take a picture of a black hole."

Bouman is 29 years old. She received her doctoral degrees in computer science and engineering from the Massachusetts Institute of Technology. She later became a postdoctoral researcher with the international Event Horizon Telescope, or EHT, project. The project's scientists produced a black hole image from data collected from a series of telescopes around the world. Together, they formed an Earth-sized "virtual" telescope -- one powerful enough to do what had once seemed impossible.

This week, the team of scientists, led by Sheperd S. Doeleman of Harvard University, released to the public the first-ever image of a black hole. 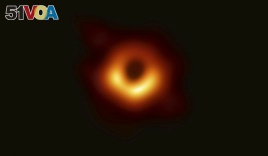 Soon after, another image was spreading over social media and the news. It showed a smiling Bouman with the black hole image on her computer screen. She wrote on Facebook, "Watching in disbelief as the first image I ever made of a black hole was in the process of being reconstructed."

Bouman led a team that helped create an algorithm, or set of computer processes that turned the huge amount of telescopic data into one image.

Bouman quickly became a symbol for women in science.

Twitter user Tammy Emma Pepin wrote of Bouman, "Here's to more women in science -- getting their credit and being remembered in history."

And Twitter user Pooja Chandraskekar, who recently completed her studies in engineering at Harvard, wrote, "So many young girls will see Dr. Katie Bouman as an inspiration and go on to make their own discoveries in space, physics, and computer science. A historic moment not just for science, but for women in science."

But Bouman herself quickly noted that she was not the only one responsible for the image of the black hole. She posted on Facebook, "No one algorithm or person made this image, it required the amazing talent of a team of scientists from around the globe and years of hard work..."

After the press event Wednesday, Bouman spoke with members of the media. She said she is looking forward to developing more algorithms and methods that will help lead to an even better, sharper image of a black hole.

Bouman will begin her teaching career at the California Institute of Technology later this year.

Ashley Thompson wrote this article for VOA Learning English. Hai Do was the editor.

virtual - adj. existing or occurring on computers or on the Internet

symbol - n. an action, object, event, etc., that expresses or represents a particular idea or quality — often + of

inspiration - n. something that makes someone want to do something or that gives someone an idea about what to do or create : a force or influence that inspires someone

talent - n. a special ability that allows someone to do something well

globe - n. an object that is shaped like a large ball with a map of the world on it