Update Required To play the media you will need to either update your browser to a recent version or update your Flash plugin.
By Alice Bryant
29 January, 2017

People who lived near the Fukushima Dai-ichi nuclear center feared for their health after a powerful earthquake and tsunami hit Japan on March 11, 2011.

The nuclear center's reactors released high levels of radiation. It was the worst nuclear accident since the Chernobyl nuclear disaster in the Soviet republic of Ukraine in 1986. 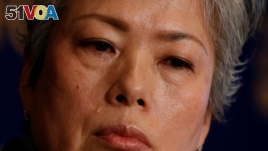 Noriko Matsumoto who fled with her children from Japan's Fukushima prefecture after the nuclear disaster, cries during a news conference in Tokyo, Jan. 17, 2017.

Matsumoto is among nearly 27,000 people who left areas that the government did not identify as required evacuation zones.

Now, the Fukushima local government is preparing to cut unconditional housing assistance at the end of March. Many people will face the choice of returning to places they fear are still unsafe or learning to deal with financial hardship.

"Because both the national and the local governments say we evacuated 'selfishly,' we're being abandoned. They say it's our own responsibility," Matsumoto, who is 55, told reporters, her voice shaking.

"I feel deep anger at their throwing us away."

A local official noted that while the housing assistance ends on March 31, smaller amounts of aid will still be provided, if needed. The official spoke on the condition that media not identify the official by name.

At the time of the earthquake, Matsumoto lived with her husband and two daughters in Koriyama city, about 55 kilometers west of the Fukushima Dai-ichi nuclear plant.

Japanese officials declared a ‘no-go' zone 30 kilometers around the plant, but Koriyama was outside of that area.

When her younger daughter, then 12, began suffering nosebleeds and diarrhea, Matsumoto and her children moved to Kanagawa, near Tokyo.

Her husband, who operates a restaurant, stayed behind in Koriyama to ensure they could make payments on their home loan and other bills. But, because of travel costs, the family can only meet every one or two months, and they face social pressure.

"People like us, who have evacuated voluntarily to escape radiation, have been judged by our peers as if we selfishly evacuated for personal reasons," said Matsumoto.

She feels her only support is housing aid that the Fukushima government gives to voluntary evacuees, who numbered 26,601 by October 2016.

The payment is generally about 90,000 yen, or $795, for a family of two or more in Matsumoto's area, a Fukushima official said. He added that full rental payments on housing are covered until March 31.

"Things here now are safe, but there are people who are still worried about safety and we understand that," he said.

The housing assistance will no longer be given to all families. Instead, officials will consider the needs of individual families.

A city official said radiation levels in Koriyama are now safe, that they have decreased by time and clean-up efforts.

But areas where radiation is high remain, say activists, and Matsumoto still worries.

"I'm a parent, and so I'll protect my daughter," she said. "Even if I have to go into debt, I'll keep her safe from radiation."

tsunami – n. a great sea wave produced by a volcanic explosion or movement of the earth

evacuate - v. to remove a person or people from a dangerous place

abandon - v. to leave and never return to (someone who needs protection or help)

diarrhea - n. an illness that causes you to pass waste from your body very frequently and in liquid rather than solid form

peer - n. a person who belongs to the same age group or social group as someone else