Update Required To play the media you will need to either update your browser to a recent version or update your Flash plugin.
By Ashley Thompson
05 October, 2018


The #MeToo movement against sexual abuse began one year ago. At first, it largely centered on professional women speaking out in Hollywood and in the fields of media and politics.

But a $22 million dollar legal fund has helped give women at all economic levels a chance to bring sexual harassment cases against employers.

Women in the entertainment industry began the Time's Up Legal Defense Fund in January. It followed accusations of sexual wrongdoing against powerful men in Hollywood. Those accusations also led to the rise of #MeToo.

In the months since the fund was launched, more than 780 lawyers have registered with the group to provide legal help. More than 3,500 people have asked for help. Forty percent of them are women of color. Two-thirds are poor or near poor.

The women come from many different industries, including building, food services, education and the military.

Fatima Goss Graves is president of the National Women's Law Center, which administers the fund. She told The Associated Press, "We've helped people bring cases they could not have brought otherwise," she said. "We can make it a reality that no matter where you work, you can work safely and with dignity."

Saturnina Plasencia is one of the women seeking assistance from the Time's Up fund. She is a 43-year-old single mother of three girls, including a newborn. 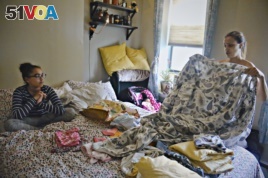 Saturnina Plasencia, 43, folds laundry while talking with her daughter, Ciara, 10, as her newborn, Chloe, sleeps near a window at their home in New York on Monday, Oct. 1, 2018.(AP Photo/Bebeto Matthews)

Plasencia works at a store in Brooklyn, New York. She says she has dealt with repeated sexual harassment from her employer. She says he decreased her work hours when she refused his requests for dates.

Plasencia said the situation worsened in early February, when she told her boss that she was pregnant.

She reports he said, "The baby could have been mine," and then reduced her work time to just 12 hours a week.

Later that month, Plasencia said an angry customer treated her very badly and her boss gave her no support in the situation.

Plasencia left her job and has been unemployed ever since.

Plasencia said she knows of other workers who were sexually harassed at the store but were too afraid to take action. She decided to bring a legal case at the urging of a doctor and social worker at the hospital where she received care during her pregnancy.

In May, five women brought a case against the Chicago Fire Department. All are emergency medical workers. All have decided to not tell their names to try to protect their jobs.

The women accuse a co-worker and several supervisors of sexual harassment. They also report that the fire department's unofficial policy of silence protected the harassers.

Amy Cramer is one of the women's lawyers. She said the Time's Up fund agreed in July to support the lawsuit.

One of the women is accusing a chief of seeking a sexual relationship with her and repeatedly sending her sexual text messages. Another woman says a firefighter stalked her, following her and watching her in a threatening way. Three of the women say a supervisor made repeated sexual comments to them.

The women have several demands including the establishment of fire department policies to fight sexual harassment. The fire department has not said what steps it might take in answer to the lawsuit.

One of the women accusers shared her thoughts in a written statement to The Associated Press. She wrote, "On the days when it gets hard and I feel like it's not worth the fight, I draw strength from my daughters. I look at them and I see the future. If I push forward and hold my ground they ultimately benefit from the struggle."

Katie Armiger signed her first record deal at age 15. She had a top-10 album by the time she was 20.

Now, she says she is being punished for speaking out about sexual harassment in the country music industry. 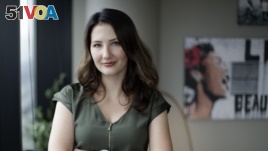 Katie Armiger poses for a picture in her lawyer's office in Nashville, Tennessee, on Sept. 26, 2018. (AP Photo/Mark Humphrey)

She faces a lawsuit from her former recording label, Cold River Records. They say her comments violated part of an agreement she signed with Cold River. The agreement bars Armiger from making negative comments about the company.

The Time's Up fund is helping Armiger fight back. They are providing money for her defense costs and for her own lawsuit against the company. Armiger's suit says agreements like the one she signed should not be enforced. It says the secrecy they demand is harmful to the public.

The singer's lawyer, Alex Little, said the case may go on for months and could be very costly. He said the fund's support will help his team to find expert witnesses to help make the strongest possible arguments.

Armiger is now 27 years old and trying to restart her career. She has met with several other music publishing companies in Nashville, Tennessee. None have offered her a deal.

She says they are "too scared, too hesitant to work with me."

Earlier this year, Armiger spoke before the Tennessee state legislature about the harassment she says she experienced.

She told the lawmakers, "I was a teenager dealing with radio programmers touching me under tables at industry events and making inappropriate sexual remarks."

She said she was told to accept and even encourage such behavior.

Armiger is now studying at a local community college. She said she is not sure if she has a future in the Nashville music industry, at least not in country.

"There aren't systems in place to protect women," she said.

harass - v. or bother (someone) in a constant or repeated way

dignity - n. the quality of being worthy of honor or respect

ultimately - adv. at the end of a process, period of time, etc.

encourage - v. to make (someone) more likely to do something