Negotiators are meeting this week in Hawaii to discuss the Trans Pacific Partnership (TPP). Trade ministers from around the world will try to settle the remaining issues.

If completed, the Trans Pacific Partnership would reduce tariffs and trade rules among the countries involved. Supporters say that would increase economic growth.

Japan, Brunei, Malaysia, Vietnam, Singapore and Australia are among the nations involved in the TPP. The others are New Zealand, Canada, Mexico, Chile, Peru, and the United States. Together, these 12 countries make up about 40 percent of the world economy.

American opponents to the deal say it would do too little to protect human rights, the environment and U.S. jobs. 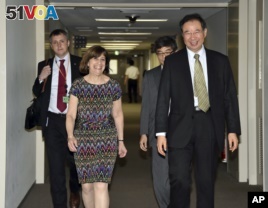 Richard Trumka is president of the AFL-CIO labor organization. In his words, the TPP "is full of stuff that is bad for working people, bad for the environment, bad for food safety."

Reduced tariffs on imports can increase exchanges and expand economic growth because trade becomes less costly. The TPP new deal cuts rules and laws that make it difficult for goods from one nation to be sold in another.

Charles Morrison is president of the East-West center in Hawaii. He said the TPP is a "very complicated negotiation" and the outcome is "far from certain." Mr. Morrison also said that many nations are pushing for the deal. But he told VOA that even if negotiators reach a deal this week, each nation would still have to approve it. That includes the United States Senate.

He told VOA the deal would likely disappoint some business groups, environmental activists or others who wish officials had negotiated more. Mr. Morrison also said failing to make a deal would deny consumers in many countries the benefits of cheaper, more efficient trade

Observers say many issues still need to be worked out to reach a deal. The United States and Japan, for example, have had disputes over car parts and rice imports. Other nations have disputed over access to Canadian markets for agricultural products.

Trade ministers are set to hold a press conference on Friday, July 31, to announce the results of the talks in Hawaii.

encourage ­– v. to make (something) more appealing or more likely to happen