'Trash Talk' and Other Trashy Expressions

Update Required To play the media you will need to either update your browser to a recent version or update your Flash plugin.
By VOA
01 January 2022

At the beginning of a new year, some people like to start with a clean slate. They like to start fresh. Sometimes that involves simply cleaning your house and getting rid of things you do not need. Some things you can give away to others or donate. Other things without value or use are trash.

And so trash is also our topic for today. After we talk about some trash expressions, you will hear them used in a conversation. 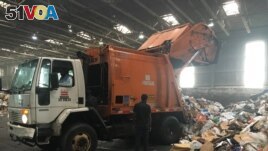 In American English, we have other words for trash such as garbage and rubbish. They all mean the same thing. Sometimes we use them interchangeably in expressions. But sometimes we don't.

"Trash talk" is insulting speech aimed at a person or a group. Trash talk is very common in sports. Members of one team could trash talk to members of another team.

For example, in baseball, if a player hits the ball poorly, the other team might say, "My 80-year-old grandmother hits harder than that!"

The term "trash talk" is a set expression. So, we do not say "garbage talk" or "rubbish talk."

Trash talk has another meaning. It can mean meaningless or false talk. We also call that kind of trash talk a load of nonsense. In that case, you could say that trash talk is a "load of rubbish," or a "load of garbage." Those all work and sound natural.

Here is another expression that uses the words rather well: "Good riddance to bad rubbish."

We say "good riddance" as a way of saying "goodbye" to something bad that will not be missed. So, "good riddance to bad rubbish" means it is better for everyone that the person or thing is leaving.

Now, there are other expressions that use garbage and trash but not rubbish.

A raccoon is an animal known for getting into people's trash cans and stealing their garbage. The black color around the eyes makes a raccoon look like a bandit or a robber. So, a funny name for a raccoon is either trash bandit or garbage bandit. We do not, however, call it a rubbish bandit. Again, it just doesn't sound right.

The same thing happens when a person uses bad language. We say he has a garbage mouth or she has a trash mouth. Again, we do not say rubbish mouth.

Garbage in, garbage out

Our last expression for today is "garbage in, garbage out." This means if something is of bad quality or done incorrectly, it most likely will produce poor results.

In computing, you might hear an engineer says garbage in, or bad codes, will produce garbage out, or poor computer programs.

But you can use it for other situations as well. For example, we often say "garbage in, garbage out" as a warning to eat healthy food. If you put bad food in your body, your energy and physical abilities will be affected.

For this expression, it is common to use "garbage." Others will understand you if you say, "rubbish in, rubbish out" or "trash in, trash out." But they don't sound as natural as "garbage in, garbage out."

Now, as promised, let's hear two friends use some of these expressions.

A: How was the basketball game last night? Did your team win?

A: Wow. You creamed them! What happened? Did they forget how to play?

B: They said they didn't practice ... at all. So, you know what they say: Garbage in, garbage out.

B: We did. The second best thing about the game was all the trash-talking. We got very creative with our insults.

A: Didn't the other team get mad?

B: Nah! It's all in good fun. They were doing their own trash talking. Soon we were competing over who had the best insults!

A: That does sound fun, especially if no one takes it personally.

B: Well ... one guy on the other team did. He kept dropping the ball. So, we called him butter hands.

B: No, he didn't. He actually left the game. But his teammates didn't seem to care. All they said was ... good riddance to bad rubbish!

A: Now, THAT is really trashy trash talk.

And that's all the time we have for this Words and Their Stories. Hopefully using our content at VOA Learning English is not garbage in, garbage out.

Anna Matteo wrote this for VOA Learning English. Hai Do was the editor.

clean slate -n. a person's record (as from a school or a job) that shows no evidence of any problems, broken rules, etc. : a clean record

conversation -n. a talk between two or more people : the act of talking

interchangeably -adv. capable of being used in place of each other

load of nonsense -n. large amount of words or ideas that are foolish or untrue : a lot of language that has no meaning

bandit -n. a criminal who attacks and steals from travelers and who is often a member of a group of criminals

code -n. instructions for a computer (as within a piece of software)

cream -v. to defeat (a person or team) easily and completely