Meet the Whale That Can Say 'Hello' and 'Bye Bye'

Update Required To play the media you will need to either update your browser to a recent version or update your Flash plugin.
By Ashley Thompson
31 January, 2018

Wikie is a 14-year-old whale living in captivity in France.

Wikie is an orca. Orcas are extremely smart, making them dangerous to their prey. Orcas are also called "killer whales."

Their intelligence makes them easy for humans to train. Many captive orcas perform tricks for audiences at marine parks. And, as it turns out, orcas can even be trained to "speak" using human language.

An group of international researchers said this week they taught Wikie to repeat human words. 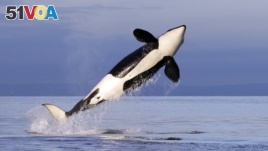 They taught her to mimic words like "hello," "bye bye" and the name "Amy." She also repeated numbers as well as sounds made by the researchers.

Wikie was a quick learner; she was able to mimic a word or sound after just 10 tries.

(You can listen to Wikie's sounds here:)

The news made Wikie a trending topic on social media.

In the wild, orcas live in groups of whales called pods. Each pod uses different sounds and calls to communicate with each other.

Scientists already knew that orcas were able to learn new whale "dialects." One orca even learned to communicate with a dolphin while living with it in captivity.

Although Wikie is able to mimic human words and sounds, that does not mean she can understand them.

Josep Call is a professor of evolutionary origins of mind at the University of St. Andrews in Scotland. He is the co-author of the study. He told The Guardian this week that there is no evidence that Wikie understands what ‘hello' stands for.

But the orca's ability is, in Call's words, "impressive -- even though the morphology [of orcas] is so different, they can still produce a sound that comes close to what another species, in this case us, can produce."

The study was published in the journal Royal Society B: Biological Sciences.

Ashley Thompson wrote this article based on reports from Science Alert and The Guardian. Caty Weaver was the editor.

captivity - n. the state of being kept in a place (such as a prison or a cage) and not being able to leave or be free : the state or condition of being captive

prey - n. an animal that is hunted or killed by another animal for food

mimic - v. to copy (someone or someone's behavior or speech)

dialect - n. a form of a language that is spoken in a particular area and that uses some of its own words, grammar, and pronunciations

morphology - n. the study and description of how words are formed in language