Is Trump Sending Messages with His Handshakes?

Update Required To play the media you will need to either update your browser to a recent version or update your Flash plugin.
By Dan Friedell
18 June, 2017


As President of the United States, Donald Trump shakes a lot of hands.

If you shake Trump's hand, you might get pulled off your feet. That almost happened to Judge Neil Gorsuch after the President nominated him to the U.S. Supreme Court in late January.

Since Trump took office on January 20, many world leaders, and even American politicians, have discovered they need to be ready for an unusual handshake from the U.S. president. 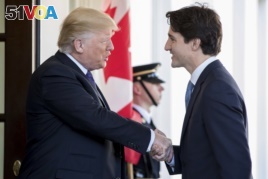 President Donald Trump welcomes Canadian Prime Minister Justin Trudeau outside the West Wing of the White House in February. Trudeau leaned in towards Trump and put his left hand near his shoulder.

Days later, Trump shook hands with Canadian Prime Minister Justin Trudeau -- twice. Each time, Trudeau moved in close to Trump as if to prevent Trump from pulling him off balance. Trudeau also placed his left hand high on Trump's shoulder, apparently to control the handshake.

In March, Trump made news by not shaking hands with German Chancellor Angela Merkel. On video, Merkel could be heard saying to Trump "they want a handshake." But Trump did not answer and did not offer his hand.

In late May, the new French President Emmanuel Macron met with Trump in Brussels, Belgium.

Many reporters reacted to Macron's handshake with Trump, including Steve Holland of the Reuters news agency. The reporter tweeted: "Trump and Macron were gripping hands hard," and "Trump just seems to want his hand back."

Macron spoke to a French publication. He said, "My handshake with him, it's not innocent." He called the handshake, "a moment of truth."

Sending a message with a handshake

Patti Wood wrote a book about body language called "Success Signals." She teaches business leaders to connect better with their employees and clients.

Wood said the tradition of shaking hands goes back hundreds of years. Originally, the greeting was an "arm clasp" and eventually it became a handshake.

The up-and-down action was a way to shake any weapons out from another person's armor or clothing. It was a way for two strangers to be sure the other person did not have a weapon.

Trump did not shake hands often until he became a candidate for president. In the past, he has said he wanted to avoid germs.

Wood said she thinks Trump also did not shake hands because it was a way for him to show he was more important than the other person.

Now that Trump has to shake hands, he tries to find another way to show his value. Wood said Trump is testing the people he meets.

"Sometimes you can catch him smiling, or even smirking, as he puts the other person off center. So it's a game, and he's playing this game, and he feels like: ‘okay, I want to win this game.'"

So, Wood said, trying to win the handshake may be Trump's way of showing he has more power than the person he is shaking hands with.

Esther Manheimer is in her fourth year as mayor of Asheville. It is a small city in the western part of North Carolina with a successful tourism industry. She meets with many visitors as well as townspeople.

Manheimer said a handshake is a way to welcome someone new. A handshake shows the person they are safe and their ideas are important.

"I, personally, haven't ever been interested in trying to set an aggressive tone with somebody else through a handshake. Actually, just the opposite. I'm trying to prepare a forum where we can feel comfortable talking with one another."

Body language expert Wood agreed that the tradition of shaking hands permits leaders to show that a newcomer is accepted.

"I'm going to shake hands with this stranger that's coming into the tribe, or in business now, coming into this meeting, to say ‘you are safe here.'"

A usual handshake is with the right hand. But what should people do with their left hand?

Wood noted how Trudeau placed his left hand on Trump's upper arm. She said that was a control move to show that you have the other person "surrounded." Wood called this a "power handshake."

But Manheimer said she uses her left hand when she wants to make another person more comfortable in a tense situation.

"Some people are really nervous, or we're meeting about something that's already kind of stressful for folks, or contentious. And so, you know, I want to make a connection with someone and let them know, like, ‘I'm another person, and I care about you, and don't be too nervous or upset about this.'"

The power of a handshake 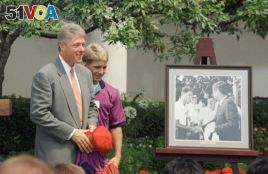 President Bill Clinton is presented a photograph of his meeting with President Kennedy in 1963 when he was member of Boys Nation.

Some handshakes are so powerful they inspire people.

That is what former U.S. President Bill Clinton said when he shook hands with President John F. Kennedy in the summer of 1963.

Clinton was 16 years old. He was in Washington with a group called Boys Nation that taught young men about government.

There is a photo of the handshake, and it is often used as an example of a good one.

You can see Clinton make eye contact with the president and lean in as he extends his hand. It is a short, firm handshake. After the handshake, another boy at the event remembered Clinton saying, "One day, I'm going to have his job."

How would you describe your handshake? We want to know. Write to us in the Comments Section or on 51VOA.COM.

nominate – v. to formally choose (someone) as a candidate for a job, position, office, etc.

relieved – adj. feeling relaxed and happy because something difficult or unpleasant has been stopped, avoided, or made easier : feeling relief

grip – v. to grab or hold (something) tightly

clasp – v. to hold (someone or something) tightly with your hands or arms

smirk – n. to smile in an unpleasant way because you are pleased with yourself, glad about someone else's trouble, etc.

tone – n. the general quality of a place, situation, etc.

forum – n. a place or opportunity for discussing a subject

contentious – adj. likely to cause people to argue or disagree