Update Required To play the media you will need to either update your browser to a recent version or update your Flash plugin.
By Mario Ritter
05 February, 2018


Turkey says its forces have set up a military position near the Syrian city of Aleppo for the first time ever.

The Turkish army described the camp as the deepest post its forces have established inside northwest Syria under a deal with Russia and Iran. The three countries say the agreement is aimed at reducing violence in the area.

Also on Monday, Turkey's government said it has detained nearly 600 critics of its military offensive in Syria. Turkish officials have repeatedly warned they would punish those opposing, criticizing or misrepresenting the offensive.

The interior ministry described the campaign in a statement. It said, "Since the start of Operation Olive Branch, 499 people have been detained for spreading terrorist propaganda on social media and 124 people detained for taking part in protest action." 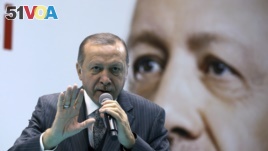 Turkish forces launched the offensive in northwest Syria last month. The operation is directed against YPG, an ethnic Kurdish militia, in Syria's Afrin area. The United States has provided support to the group.

Turkey's mainly pro-government media and most political parties have expressed support for the military operation. But last week, a government lawyer ordered the detention of 11 members of the Turkish Medical Association, including its chairman. The association had criticized the raid, saying, "No to war, peace immediately."

The group said that all of the doctors had since been released on probation. It reported their release on the social media network Twitter.

Turkish President Recep Tayyip Erdogan has criticized opponents of the military intervention in Syria as "traitors."

The Turkish government considers the YPG militia a terrorist group. It says the milita is tied to the Kurdistan Workers Party, which has fought against the army in Turkey's southeast for more than 30 years.

Turkey's deepest movement yet into Syria

Turkey's announcement of the military post came six days after a large number of military vehicles came under attack near Aleppo and had to pull back.

Under the deal with Iran and Russia, Turkey agreed to set up 12 observation posts in Idlib and neighboring provinces.

However, violence has not decreased under the agreement. In December, the Syrian army, working with Iranian-supported militias and Russia aircraft, launched an offensive in Idlib province.

The Syrian civil war has lasted nearly eight years and driven 11 million people from their homes. Hundreds of thousands of people are believed to have been killed in the fighting.

probation – n. a period of time when a person who has made a mistake or committed a crime is permitted to stay out of jail although they are watched

traitor – n. someone not loyal to their own country

association – n. an organization or group