Update Required To play the media you will need to either update your browser to a recent version or update your Flash plugin.
By Christopher Jones-Cruise
10 May, 2016


Michel Platini has resigned as the president of UEFA, the Union of European Football Associations.

Platini announced his resignation on Monday after the Court of Arbitration for Sport failed to cancel his ban from the sport. However, the court did reduce the length of the ban, from six years to four.

Platini was accused of taking $2 million from FIFA, the international governing body of football. In the United States, the sport is called soccer. 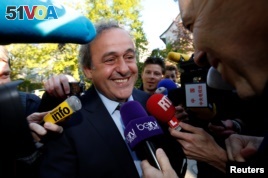 UEFA President Michel Platini arrives for a hearing at the Court of Arbitration for Sport (CAS) in an appeal against FIFA's ethics committee's ban, in Lausanne, Switzerland, April 29, 2016.

The court found he received suspect payment for working as an adviser to Sepp Blatter, who was then FIFA's president. Blatter resigned his position in 2015 while the organization was being investigated for corruption.

The court said the payment was not linked to any kind of business agreement and was not part of Platini's wages. It noted that he received the payment eight years after his work at FIFA ended.

In a statement, Platini said the court's "decision is inflicting (on) me a suspension whose length will de facto prevent me -- as if by chance -- from bidding for the next FIFA presidential election."

He called the decision a "profound injustice." He said he will consider asking a court in Switzerland to find him innocent.

Platini has led UEFA since 2007. His term as president was set to end in March 2019. The next election for FIFA president is to take place in May 2019.

inflict – v. to cause someone to experience or be affected by (something unpleasant or harmful)

de facto – adj. used to describe something that exists but that is not officially accepted or recognized