Update Required To play the media you will need to either update your browser to a recent version or update your Flash plugin.
By John Smith
06 March, 2017

The diplomats traveled to Maiduguri, the capital of Nigeria's Borno State. They met there with women at a camp for displaced persons.

The diplomats have been on a four-day-long trip to the Lake Chad Basin. They went to Cameroon, Chad and Nigeria before going to Niger on Monday. 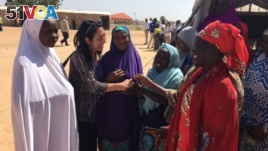 On Sunday, the ambassadors arrived in Maiduguri under heavy security. Two days earlier, three bombers died in a suicide attack near a fuel station. No civilians were hurt in the explosions.

The diplomats met with the women in a camp where about 7,000 people live. They heard the women tell about their husbands being killed. The women also said they had been abused by Boko Haram. The militant group has been fighting against the Nigerian government and its forces since 2009.

Deputy United States Ambassador Michelle Sisson was the only woman in the U.N. group. She has expressed support for women and girls in the Lake Chad Basin.

"...I'm hearing stories not only of these families, and these women who have been victimized, their children victimized, by Boko Haram, but then the protection needs especially of women and girls, not only inside the camp, but also if they have to go outside, either for firewood or to seek some sort of income-generating activity."

U.N. officials say aid workers have yet to reach about 700,000 people in eight local government areas.

Officials say more than five million people in northeastern Nigeria are in need of food. At the camp for displaced persons, many people said they are not given enough aid to feed their large families.

The United Nations has warned that about two million people in parts of the northeast could face famine conditions in the coming months if donors do not intervene. Peter Lundberg is the U.N. Deputy Humanitarian Coordinator for northeast Nigeria.

"There is no famine right now in the northeast, but we are really, really playing with a fire unless we continue to ensure that these people are getting steady assistance on a regular basis, and it is a struggle. Right now the food operations here cost $1 million per day."

Lundberg added that countries must keep the promises they made at a humanitarian conference in Norway last month. Delegates there promised more than $450 million in aid to help people in the Lake Chad Basin this year.

steady – adj. happening or developing in a continuous and usually gradual way