UN: Temple Destruction Is a 'Crime Against Civilization'

Update Required To play the media you will need to either update your browser to a recent version or update your Flash plugin.
By VOA
01 September, 2015


A United Nations official says Islamic State militants have destroyed the Temple of Bel in the historic Syrian city of Palmyra. The head of the U.N.'s cultural agency is calling the destruction, an "intolerable crime against civilization." UNESCO chief Irina Bokova added that her agency would try to protect "all that can be saved" from the Islamic State.

Officials say the militants used explosives to destroy the ancient ruins on Sunday. The U.N. released two satellite images of the Temple of Bel. Officials said one was taken on August 27; the other, on Monday -- one day after Syrian observers said the temple had been destroyed. 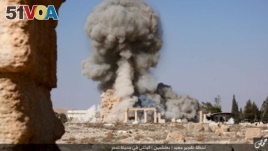 An image distributed by Islamic State militants on social media on August 25, 2015 purports to show the destruction of a Roman-era temple in the ancient Syrian city of Palmyra.

Maamoun Abdulkarim is Syria's antiquities director. He said on Monday there had been a big explosion in the area. But he added that no one has been able to get close enough yet to confirm how much, if any, of the temple survived.

The Temple of Bel is nearly 2,000 years old. Syrians consider it to be one of the country's most important shrines. Experts say it was probably used for religious purposes long ago.

The Syrian Observatory for Human Rights reported two weeks ago that the Islamic State executed Palmyra's former antiquities director, Khaled Asaad. The British-based observatory said the group cut off his head and left his body so passers-by could see it. 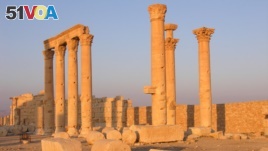 Historians began saying Palmyra's priceless treasures were endangered when Islamic State forces seized the city in May. The militants have also destroyed historic artifacts in Iraq. They say the ancient objects are blasphemous – an insult to God.

But the Observatory says Islamic State has sold a number of ancient pieces to raise money. It says the militants are actually destroying copies in some videos that claimed to show them breaking works of art.

Brett McGurk is one of President Barack Obama's main advisors to the coalition against the Islamic State, also known as ISIL. Ambassador McGurk told reporters on Sunday that the fight against the group is moving forward.

"The objective in this first year is to degrade its capabilities; is to remove its leaders; to degrade its ability to mass; and maneuver force around the battlefield. And that's what we're doing right now."

But he admits the Islamic State is something the world has never seen before. The militant group is said to have about 25,000 foreign fighters from about 100 countries.

Kenneth Schwartz, Kokab Farshori and Victor Beattie reported this story. George Grow adapted it for Learning English. Hai Do was the editor.

temple – n. a building or other structure meant for religious or spiritual activities

antiquities – adj. relating to objects, buildings or works of art from long ago

degrade – v. to slowly break down

maneuver – n. movement or a series of movements; a military exercise of troops and other forces