Update Required To play the media you will need to either update your browser to a recent version or update your Flash plugin.
By VOA
30 August, 2015


The U.S. Open tennis tournament begins Monday in New York City. It is the last opportunity for 127 women to win a ‘Grand Slam' title this year. And it is a chance for one player to win a place in history.

American player Serena Williams is the heavy favorite to win the women's title. For Williams, her U.S. Open victory would mean much more than just another Grand Slam trophy.

The 33-year-old Williams is hoping to complete a women's singles Grand Slam. No female player has completed a calendar-year Grand Slam in 27 years. Only three players have ever done so. The last player to do so was Germany's Steffi Graf. 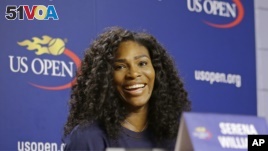 If Williams is victorious at the U.S. Open, she would also tie Graf's 22 Grand Slam titles. That is the second-most Grand Slam wins in women's tennis history, behind Australian player Margaret Court, who won 24.

The possibility of Williams completing a calendar-year Grand Slam has fans of women's tennis more excited than ever. The U.S. Tennis Association said Thursday that tickets for the women's singles final sold out before the men's singles final. The organization believes it is the first time that has happened in U.S. Open history.

No player has dominated women's tennis quite like Serena Williams. She is the current champion of all four of tennis' Grand Slams: the Australian Open, French Open, Wimbledon, and finally, the U.S. Open. Serena won the U.S. Open last year. Tennis fans, and Williams herself, call her four grand slam titles in a row a "Serena Slam." She has achieved the so-called "Serena Slam" twice in her career.

But a calendar-year Grand Slam is one thing Williams has never done. She has admitted to feeling the pressure.

"It definitely feels different because I have never been in this position in my career," she told the Reuters news agency.

Williams spoke to reporters Thursday after the tournament's draw was released. She told reporters she would like to avoid comparisons to past tennis greats, such as Steffi Graf and Margaret Court.

"I never really thought I would be in this position where I would even be talking about records, talking about passing Steffi Graf or even mentioning Margaret Court," Williams said. "I just grew up trying to be the best that I could."

Williams won her first-ever Grand Slam tournament at the 1999 U.S. Open, at the age of 17. Sixteen years and 20 grand slam victories later, she is aiming to make history.

This story was based on reports from Reuters. Ashley Thompson wrote it for Learning English. Hai Do was the editor.

Words in This Story:

trophy - n. an object (such as a large cup or sculpture) that is given as a prize for winning a competition

tie - v. to make the score of a game or contest equal

dominate - v. to be much more powerful or successful than others in a game or competition

draw - n. an act of selecting names randomly to match competitors in a game or tournament.