Update Required To play the media you will need to either update your browser to a recent version or update your Flash plugin.
By VOA
25 August, 2015


Ukraine celebrated its Independence Day earlier this week. The holiday marked an event that signaled the collapse of the Soviet Union, and it still colors Russia's thinking about Ukraine.

Ukrainian President Petro Poroshenko was in Kyiv for Independence Day celebrations on Monday. He told a crowd that the next year would be one of struggle against Russia's efforts to weaken Ukraine.

The president accused Russia of sending more troops and weapons across the border between the two countries. 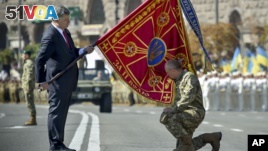 Ukraine's President Petro Poroshenko hands over a flag of a military unit on the occasion of Ukraine's Independence Day in the capital Kiev, Ukraine, Monday, Aug. 24, 2015. Speaking at the parade, President Petro Poroshenko said Ukraine would continue to increase its troop numbers in order to fend off the attacks of separatist rebels.(AP Photo/Mykola Lazarenko, Pool)

"We have to understand that any wrong step could be the last," he said. "The war for independence is still going on and victory is possible only through combined efforts of defense, diplomatic pressure and political responsibility."

President Poroshenko said Ukraine's fight for independence would continue for many years.

Dmitri Trenin is director of the Carnegie Moscow Center.

"To a lot of people in Ukraine, what's happening is a rebellion which is backed by Russia. And, in that sense, Poroshenko is fighting for ... complete independence from Russia."

Ukraine declared its independence from the Soviet Union on August 24, 1991. A few months later, Ukrainians voted to support the declaration in a special referendum. The Soviet Union officially broke up at the end of 1991.

But Dmitri Trenin says it was only in the late 1990s that the Russian people and government accepted the idea of Ukraine as an independent state.

"The Ukrainian referendum back in 1991 essentially nixed all remaining illusions about preserving some kind of a union, close union, of former Soviet republics. And, it basically told the Russians that from now on they have to be on their own."

He says Russia's takeover of Crimea last year was a move the government had planned to make for a long time, if it found itself losing influence in Ukraine to the West.

The government strongly opposed the popular rebellion in Ukraine last year. The rebellion led to the ouster of President Viktor Yanukovych.

Russian nationalists have used the unrest to question Ukraine's standing as an independent nation. But rebel-controlled areas along the border with Russia have largely rejected movements like "Russia World" and "New Russia."

Clashes between the rebels and Ukrainian forces have killed more than 6,500 people since fighting began in April 2014. The unrest in Ukraine's east began just weeks after Russia seized Crimea.

The leaders of France, Germany, and Ukraine met in Berlin Monday to discuss efforts to deal with in the recent fighting.

Mr. Poroshenko said they need to guarantee that the Organization for Security and Cooperation in Europe can send observers along the Russian border. Russia and the rebels currently limit OSCE access to just part of the border.

She said, "We are here to implement the Minsk deal, and not to call it into question."

The talks were expected to lead to a four-party meeting that would include Russian President Vladimir Putin.

VOA's Daniel Schaerf reported this story from Moscow. George Grow adapted it for Learning English. Mario Ritter was the editor.

signaled – v. to make a sign of; to show the existence of something

referendum – n. a special election or vote on a given issue

nixed – v. to refuse or reject

illusions - n. dreams; something that seems different from what it is

implement – v. to carry out; to begin to use; to perform