US Calls for Reform of the UN Human Rights Council

Update Required To play the media you will need to either update your browser to a recent version or update your Flash plugin.
By Mario Ritter
07 June, 2017


The United States Ambassador to the United Nations has warned that the U.S. might withdraw from the U.N. Human Rights Council.

Nikki Haley spoke Tuesday at the opening of UNHRC's three-week meeting. She said the Council needs to make reforms. If that happens, she said, the U.S. might remain a member.

"I am grateful for the opportunity to speak in front of this body on an issue that we believe is very important – respect for human rights. As you know, the United States is looking carefully at this council and our participation in it. We see some areas for significant strengthening.".

Haley criticized the Council for what she called a double standard on Israel.

She noted that the group had never approved a resolution condemning Venezuela for human rights violations. Yet, she said, in March the Council passed five resolutions against Israel. She described those resolutions as "biased."

Haley said the UNHRC actions against some countries, and not others, hurt its credibility. She said the group must deal with what she called its "chronic anti-Israel bias."

The U.S. has long argued that the UNHRC treats reports of rights violations differently in the Occupied West Bank and Gaza Strip than in other places.

Even critics of Israeli policies say the country is more closely observed for human rights than other countries. They note that serious and systematic human rights abuses in all other countries, such as North Korea, Syria, Eritrea, Iran, Democratic Republic of Congo and Burundi are examined under the same item 4 on the agenda. Israel, however, is dealt with alone as item 7.

But other experts say that the U.S. can only blame itself for UNHRC operations it does not agree with. They say the U.S. lost its influence in the Council after it boycotted the group for three years under President George W. Bush.

The U.S. rejoined the Human Rights Council in 2009 during President Barack Obama's administration. 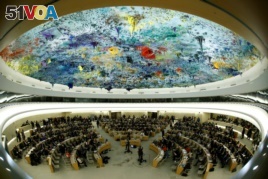 He called for "the end of the occupation" of the Palestinian territories. He said "the Palestinians deserve freedom, as all peoples do."

And, he added, "the Israelis also deserve freedom."

John Fisher, is an official with Human Rights Watch in Geneva. He said reform would help the council.

In a statement, he said any steps to improve membership standards would strengthen the Human Rights Council.

Jamil Dakwar is the director of the American Civil Liberties Union's Human Rights Program. He criticized the U.S. human rights record, noting its efforts to ban travel to the U.S. from six Muslim-majority countries. He also criticized its policies on illegal immigrants.

He said the U.S. should deal with its own human rights issues.

Venezuela the target of rights criticism

She said the government of President Nicolas Maduro was starving and repressing its citizens. Haley noted the more than 60 anti-government protesters killed in the country since April, along with thousands injured and detained. She said more than 300 civilians have been charged in Venezuelan military courts.

Venezuela's ambassador to the U.N. said the U.S. is responsible for such violence.

The Venezuelan opposition, however, welcomed Haley's remarks. It called for Venezuela to protect human rights or lose its place on the council.

A lawmaker in the National Assembly, Juan Requesens, asked the international community for support. He called for restrictions against human rights violators.

participation –n. taking part in some activity, movement or plan

credibility –n. the ability to have others believe what you say