Update Required To play the media you will need to either update your browser to a recent version or update your Flash plugin.
By Bryan Lynn
27 October 2021


Blue Origin is the latest American company to announce plans to develop a private space station. The company and its partners said this week that the station, called "Orbital Reef," will be operated as a "mixed use business park" in space.

Blue Origin's main partner will be Sierra Space, a part of U.S.-based defense contractor Sierra Nevada Corporation. The project is also backed by Boeing, Arizona State University and other companies.

In a statement, Sierra Space said Orbital Reef aims to open up new markets in space and provide individuals and companies the chance "to establish their own address on orbit." 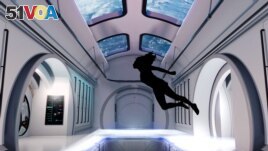 The company aims to begin operating Orbital Reef between 2025 and 2030. The station plans to stay in low-Earth orbit, at about 500 kilometers, which is higher than the International Space Station (ISS).

The developers say Orbital Reef will support 10 people in an area of about 830 cubic meters, nearly the size of the ISS. It will serve a range of private customers. This could include science researchers, space agencies, nations without space programs and technology and manufacturing companies.

Space tourists would also be able to visit Orbital Reef. The visitors would be able to enjoy clear views of Earth and would experience 32 sunrises and sunsets each day, Blue Origin said in an online fact document.

Brent Sherwood is Senior Vice President of Advanced Development Programs for Blue Origin. He said the past development of flight vehicles and space stations by NASA and other space agencies had prepared the way for private space stations to become a reality.

Now, Orbital Reef will seek to "expand access, lower the cost, and provide all the services and amenities needed to normalize space flight," Sherwood said.

Blue Origin has already launched a space tourism service that provides rides to the edge of space aboard its rockets and spacecraft capsule. The flights permit passengers to experience a few minutes of weightlessness and observe Earth from afar.

Lindy Elkins-Tanton is Vice President of the Interplanetary Initiative at Arizona State University. She has been involved in planning Orbital Reef. In a Blue Origin video, Elkins-Tanton said she sees the project as a kind of space "village."

"Think of it as many different organizations and people in their own parts of Orbital Reef, doing their own activities," she added.

Sherwood said that the station's developers will work hard "to make sure that Orbital Reef is not just for the entities that have had access to space so far." Instead, he said it will be designed "to be humanity's footprint" in low-Earth orbit. "And that means all the nations and companies and peoples of the world."

Sierra Space has also been developing a space plane called Dream Chaser. It has been awarded a NASA contract to perform at least seven supply missions to the ISS beginning as soon as next year, the company announced in April.

Orbital Reef is one of several private space stations planned in the coming years as the future of the aging ISS is unclear. The ISS project is set to end in 2024 unless its international partners approve new financing to keep it going.

NASA officials have signaled that a continuation of the ISS beyond 2024 is likely. But NASA also holds a contract with a company called Axiom to develop a new space station that will first be attached to the ISS before becoming free-flying.

The ISS's other main supporter, Russia, has said it is considering quitting the project as early as 2025 to build its own space station. China's space agency has already deployed a new space station and sent astronauts to visit it earlier this year.

The plans for private space stations have been welcomed by NASA, which announced this year it plans to award up to $400 million in contracts for such projects.

Last week, another private space station project was announced by a group of cooperating American companies. Space services company Nanoracks said it was teaming up with Voyager Space and Lockheed Martin to develop "the first-ever free flying commercial space station." The companies say that space station, to be called "Starlab," should be operational by 2027.

Bryan Lynn wrote this report for VOA Learning English, based on reports from Reuters, Agence France-Presse, Sierra Space, Blue Origin, Nanoracks and NASA. Hai Do was the editor.

address – n. the details of where a building is, including the number, road name, town, etc.

access – n. a way of getting near, at or to something or someone

amenity – n. a building, piece of equipment or service that is provided for people's comfort of enjoyment