Update Required To play the media you will need to either update your browser to a recent version or update your Flash plugin.
By Dan Friedell
16 January 2023


A new recommendation from the American Academy of Pediatrics, says doctors should treat childhood obesity aggressively.

Obesity is a word used to describe severely overweight people.

In the past, many doctors thought children would grow out of bad eating habits. They used the method of "wait and see" to decide what to do. But the new guidelines say obese children should undergo operations or take medications to reduce their weight. Both actions, the doctors' group said, should reduce the amount of food children can eat. 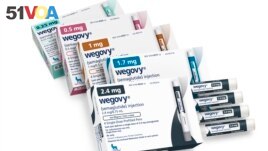 This image provided by Novo Nordisk in January 2023, shows packaging for the company's Wegovy drug. A study found that Wegovy helped teens reduce their body mass index by about 16 percent on average. (Novo Nordisk via AP)

The new guidelines recommend weight loss drugs for children as young as 12 and operations, or surgery, starting at 13.

Ihuoma Eneli is a doctor who co-wrote the report containing the new guidelines. Eneli disagrees with the old guidelines. She said, "waiting doesn't work." She said doctors usually see "a continuation of weight gain and the likelihood that [children will] have obesity in adulthood."

Eneli is the director of the Center for Healthy Weight and Nutrition at a hospital in Columbus, Ohio. She said the drugs or surgery should go along with life changes. That means children need help choosing better foods and finding ways to exercise more.

Dr. Sandra Hassink was the other doctor who wrote the report. She works for the American Academy of Pediatrics and is the medical director for the Institute for Healthy Childhood Weight. Hassink said the report offers pediatricians a different way to think about obesity. In the past, she said, doctors sometimes thought of obesity as a "personal problem," or failure.

Children are considered obese if their body mass index, or BMI, is higher than 95 percent of children of the same age. BMI is a measure of body size based on a person's height and weight.

She said the weight loss tools described in the report should be thought of in the same way as other treatments for health problems. She compared it to prescribing an inhaler for someone who has asthma. Asthma is a medical condition that causes people to have trouble breathing. An inhaler supplies medicine that opens a person's lungs. In the same way, the drugs the doctors talk about in their guidelines help a person to eat less food, which will help them lose weight.

Semaglutide is the drug described in the report. It started as a diabetes treatment. But a version of semaglutide called Wegovy recently received approval as an obesity treatment for children 12 and older.

The New England Journal of Medicine reported that teenagers have used the drug and reduced their BMI by an average of 16 percent.

Dr. Claudia Fox is a weight management doctor at the University of Minnesota. When Wegovy received approval in late December, she started prescribing it to teenagers.

Fox said the drug helps her patients have a "possibility of even having an almost normal body mass index." She called the results "a whole different level of improvement," compared to other treatments.

Justin Ryder is a doctor who researches obesity for a children's hospital in Chicago. He said the drug helps the brain and the stomach communicate. "And," he said, "helps you feel more full than you would be (without it)."

While children are losing weight because of the drug, it is hard to get. There are two reasons: there is a production shortage, and more doctors are offering it to their patients. Semaglutide is now popular because people on social media have lost weight using it.

Some doctors, however, worry that not every overweight child is a good candidate for the drug. Dr. Robert Lustig studies children's health at the University of California in San Francisco. He said he wants to be sure people do not prescribe the medication "willy-nilly."

Dr. Stephanie Byrne is at the Cedars Sinai Medical Center in Los Angeles. Byrne said she still wants to see more research on how semaglutide affects many different children.

But, she said, she is glad pediatricians are starting to think differently about obesity.

"I definitely think this is a realization that diet and exercise is not going to do it for a number of teens who are struggling with this," she said.

habit –n. something a person does regularly in a repeated way

diabetes –n. a disease in which the body does not correctly control the amount of sugar in the blood

prescribe –v. (medical) to officially tell and permit someone to use a medication to treat a problem

willy-nilly –adj. in a careless or unplanned way