Update Required To play the media you will need to either update your browser to a recent version or update your Flash plugin.
By Dan Novak
16 January 2023


A newly restored house in the ancient Roman city of Pompeii opened to the public on Tuesday. The House of Vettii, or Domus Vettiorum, as it is called in Latin, had gone through 20 years of repair and improvement.

The house likely belonged to two former slaves who became rich through the wine trade. The house offers visitors a look at everyday life in Pompeii. The city was buried by volcanic ash from Mount Vesuvius in the year 79.

The restoration of the home is yet another sign of the rebirth of Pompeii. 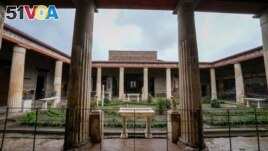 Colums frame the 'peristylium', or courtyard, in the center of the Ancient Roman Domus Vettiorum (AP Photo/Andrew Medichini)

"The House of the Vetti is like the history of Pompeii and actually of Roman society within one house," said Pompeii's director, Gabriel Zuchtriegel. He spoke as he displayed the home's Cupid Rooms last month. He said it shows the last period of Pompeian-made wall paintings called frescoes.

"You can stand before these images for hours and still discover new details," Zuchtriegel said. He described the home as "a story about the social life of the Pompeiian society and actually the Roman world in this phase of history."

The restoration of the frescoes involved a new, better method using wax.

Zuchtriegel thinks the fresco paintings show "the dreams and imagination and anxieties of the owners because they lived between these images.''

And who were these owners? The Vettis were two men — Aulus Vettius Conviva and Aulus Vettius Restitutus. Pompeii experts say they were once enslaved men who were later freed. It is believed that they became wealthy through the wine trade. Some think the two were brothers.

In the living room, known as the Hall of Pentheus, a fresco shows an image of the imaginary character Hercules as a child. He is crushing two snakes. In ancient stories, the goddess Hera sent snakes to kill Hercules.

Perhaps the Vettius men saw their own life story in the image of Hercules who overcame great difficulties. This possibility interests Zuchtriegel.

The men "tried to show their new status also through culture," he said, adding "it's all about saying, ‘We've made it and so we are part of this elite.'"

Architect Arianna Spinosa is director of the restoration. She said it represents the perfect Pompeii home, because of both the frescoes and the architecture.

The house was discovered in the late 19th century. It was closed in 2002 for urgent restoration work. After a partial reopening in 2016, it was closed again in 2020 for the final phase of the work, which included restoration of the frescoes, floor and structural elements.

restore — v. to return (something) to an earlier or original condition by repairing it, cleaning it, etc.

society — n. people in general thought of as living together in organized communities with shared laws, traditions, and values

anxiety — v. fear or nervousness about what might happen

status — n. the position or rank of someone or something when compared to others in a society, organization, group, etc.

elite — n. the people who have the most wealth and status in a society : the most successful or powerful group of people