Ukrainian Soldiers to Train on Missile System in US

Update Required To play the media you will need to either update your browser to a recent version or update your Flash plugin.
By Dan Friedell
14 January 2023


About 100 Ukrainian soldiers will arrive in the United States as soon as next week to begin training on the Patriot missile defense system.

The system is able to identify and shoot down enemy aircraft and missiles.

The decision to train the Ukrainian soldiers and provide the missile defense system came out of the December visit to the U.S. by President Volodymyr Zelenskyy. 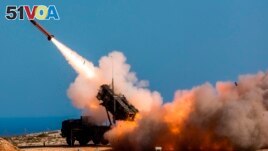 The Ukrainian president said the system and training would make a difference in his country's war with Russia.

The number of soldiers coming to the U.S. is the number required to operate one missile system. An American military spokesperson said the soldiers will also learn about long-term care for the system.

The official also said Ukraine's armed forces will be reduced by 100 soldiers during the training period, which normally takes many months. The Ukrainian training will be briefer so the soldiers can return to the ongoing fighting.

The soldiers will stay at Fort Sill, a Patriot missile training center.

The U.S. offered Ukraine one missile system during meetings in December, along with other military aid. Germany also offered a Patriot system last week.

Each Patriot system comes with eight launchers that carry four missiles. The U.S. said it has 16 groups of soldiers that operate Patriot missile systems.

The Patriot systems will add to air defenses already sent by the U.S. and other NATO partners.

Ukraine has been defending itself from Russian missile and drone attacks for nearly one year. The war started in late February of last year.

drone –n. an unmanned aircraft controlled by someone far away, often used for attacks in war or to take photos from above