Update Required To play the media you will need to either update your browser to a recent version or update your Flash plugin.
By Dan Novak
05 January 2023


The leader of the Roman Catholic Church, Pope Francis, has led the funeral of former leader, Pope Benedict XVI. Tens of thousands of mourners attended the event Thursday in St. Peter's Square in Vatican City. Some called on the Church to name Benedict a saint.

Benedict retired as pope in 2013. He was the first to do so in 600 years. Most popes lead the Church until they die.

At the end of the funeral, some people in the crowd shouted in Italian, "Make him a saint now!" 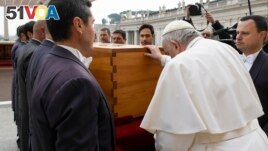 In this image released by the Vatican Media news service, Pope Francis touches the coffin of late Pope Emeritus Benedict XVI after his funeral mass in St. Peter's Square at the Vatican, Jan. 5, 2023.

About one-third of all popes have been declared saints in the 2000 years the Church has existed. That includes three of the last five popes.

Benedict has been both praised and criticized for his service. Conservative Catholics liked his support of a more traditional Church. Critics accuse him of protecting clergy accused of sex crimes, and other wrongdoing.

Francis sat for most of the service because of a knee injury. He only named Benedict once at the service attended by 50,000 people.

He stood at the end as Benedict's coffin was being carried away for a private burial inside the church. Lowering his head in prayer, Francis briefly touched the casket.

A record documenting Benedict's time as pope was placed in his coffin along with other objects. The document says Benedict "fought with firmness" against sexual abuse by clergy in the Church.

Benedict largely avoided public appearances after his resignation. But, he remained a leader for Catholic conservatives, who disagree with modern reforms made by Francis.

People from all over the world, and many from Benedict's native Germany, had arrived early in the morning to say goodbye. There were also a few heads of state and some European royalty.

About 200,000 people went past Benedict's body while it was lying-in-state for three days until Wednesday evening.

The service started when 12 people carried the coffin holding Benedict's remains out of the basilica. They then placed it on the ground before the church. Bells rang the entire time.

The last time a sitting pope had led a funeral for an earlier pope was in 1802. That was when Pius VII led the service for Pius VI, whose body returned to the Vatican after he died in 1799 in exile.

Francis used many biblical references and Church writings in the service. He appeared to compare Benedict to Jesus, including his last words before he died on the cross: "Father, into your hands I commend my spirit."

saint — n. a person who is officially recognized by the Christian church as being very holy because of the way he or she lived

reference — n. the act of mentioning something in speech or in writing

commend — v. entrust someone or something to